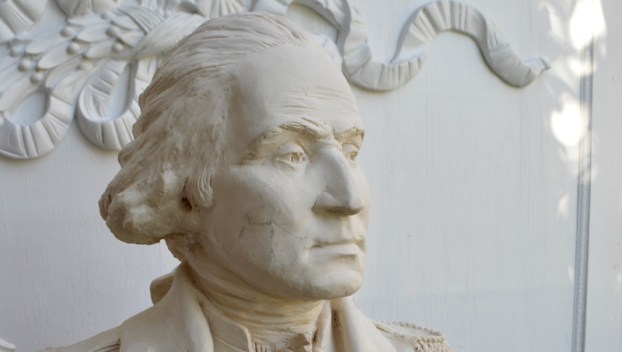 PRESIDENTIAL COMPOSURE: A stately bust of George Washington, donated to the city by Washington Area Historical Foundation President Don Stroud, will soon sit in a place of prominence in City Hall. The WAHF will hold a special reception next Friday afternoon to commemorate the occasion.

For most cities, the week of Presidents Day comes and goes with little fanfare. Not so in Washington. Specifically, George Washington’s 287th birthday next Friday promises to be especially memorable this year, as Washington comes to the city of his namesake twice in one day.

On Friday afternoon, the Washington Area Historical Foundation will host a special reception at City Hall commemorating the installation of a donated marble bust of the first president. Later that evening, food, live music and libations will flow at Festival Park, as the Washington Harbor District Alliance hosts the inaugural “George Washington’s Rock and Roll Birthday Bash.”

Gazing out across Market Street, a marble bust of George Washington will soon be on full public display at City Hall. WAHF President Don Stroud donated the Classical-style piece to the city during the monthly meeting of the city council on Monday.

The marble bust is the work of the late artist Dr. John A. Lanzalotti, a medical doctor from Williamsburg, Virginia. In addition to practicing medicine for 40 years, Lanzalotti was also a Naval officer and a renowned sculptor.

Stroud, a passionate antiquarian, found the piece through an antique dealer in Virginia and bought it with the idea of putting on display somewhere in Washington. In addition to that piece, the Washington lawyer has also donated the concrete statue at Harding Square and a piece commemorating 9/11 in the churchyard at St. Peter’s Episcopal Church.

“I think public art is very important,” Stroud said. “Any type of art is the language of the soul. Most people learn more easily when they see something physical. When you’ve got a physical representation of the first president, in the first town named after Washington, it hits home.”

WAHF will hold a public reception for the unveiling of the statue on the second floor of City Hall from 2 to 3:30 p.m. on Feb. 18. Refreshments will be served.

On the heels of the reception, the celebration continues Friday afternoon with a parade downtown at 4 p.m. featuring the man himself, George Washington, riding down Main Street in a Ford Mustang — the classic American muscle car.

That evening, from 6 to 10 p.m., the WHDA and Curtis Media Group will host the first-ever “George Washington’s Rock and Roll Birthday Bash,” celebrating the Founding Father with a party at Festival Park.

“George Washington never visited his namesake — the Original Washington,” WHDA Director Meg Howdy said. “So he is rectifying that fact (next weekend).”

The event will take place in a heated tent on the waterfront, featuring a buffet of American cuisine, a cash bar and live music from Joe Baes Project, a group that plays a unique range of musical stylings, from classic rock and blues to country and contemporary.

Tickets for the Birthday Bash are available online at washingtonweek2019.brownpapertickets.com or at the Washington-Beaufort County Chamber of Commerce. Cost is $20 in advance or $25 at the door.

On Saturday morning, in a recreation of a famous historical event on the Delaware River, Washington will cross the Pamlico just before 9 a.m., marking the start of the inaugural Washington Powder Wig 5K and Fun Run.

Racing down Main Street and making a loop around Washington Park, participants will be sporting a unique piece of attire — every runner will receive their own powdered wig. Registration for the race and information about the weekend’s events are available online at www.washingtonweeknc.com.

Finally, a model train show at the Blind Center of North Carolina will round out the weekend, from 9 a.m. to 4 p.m. Saturday. While Washington and the railroads were not contemporaries, the Blind Center is hoping for a special appearance from the Commander in Chief. The event will feature themed layouts from the Civil War, Thomas the Tank Engine, Harry Potter and a variety of other displays. Admission is $12 for one family, $5 for adults and free for kids, with proceeds supporting the Blind Center.

Two hundred years ago, few houses lined the north side of what was likely a single lane dirt road. The... read more