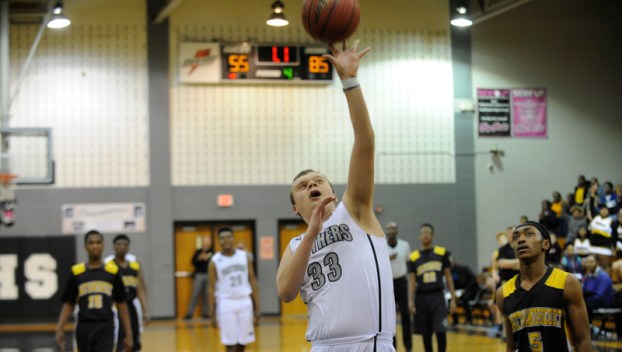 BUZZER BEATER: Garrett Rose puts up a shot to score as time expires during Wednesday’s game against Mattamuskeet. Rose, who finished with 10 points, brought a huge smile to everyone in the gym, Panthers and Lakers alike, with his play and visible joy from being on the court. (Sean Finnerty | Daily News)

Garrett Rose’s play on the court steals the show

PINETOWN — For those in attendance for the Northside boys basketball team’s matchup with Mattamuskeet Wednesday night, the fact the Panthers came away with a 87-55 win is surely a mere afterthought. That’s because everyone in the gym had the opportunity to witness a young man’s wildest dream come true in a beautiful moment of sportsmanship that had everybody, including the visiting Lakers and their fans in the stands, beaming from ear to ear.

Senior Garrett Rose, who has autism and is a student in Northside’s Exceptional Children program, serves as the basketball team’s manager, but on Wednesday he got to suit up in the No. 33 jersey and play. Entering the game to rapturous applause with 1:41 left in the second quarter, Rose made sure to leave his mark on the game, and on those watching.

With his teammates looking to get him the ball, Rose scored on a layup, causing the gym to erupt in cheers. Then he scored again and again and again. It was pure euphoria as Rose racked up the points, and it was hard to tell who enjoyed it most: the fans watching, Rose’s teammates or Rose himself. 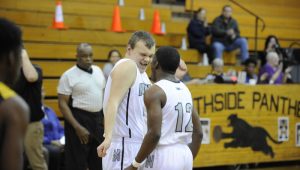 HYPED UP: Garrett Rose celebrates with Kenneth Winfield after scoring on of his baskets against Mattamuskeet. (Sean Finnerty | Daily News)

Rose’s cousin and guardian, Timothy Rose, was so moved by the moment, he couldn’t quite put into words how it felt.

“It was actually very special,” Timothy said. “It was like nothing else. It took a lot of class (from) both teams, a lot of sportsmanship. I was stunned at how both teams handled it. I was really surprised at how the whole crowd got behind him and everybody was rooting for him. It was a fantastic feeling. It was a feeling I guess you’d have to feel to understand it.”

Re-entering the game late in the fourth quarter, the younger Rose scored one last basket as the buzzer sounded to finish with 10 points. The entire Northside team and coaching staff then mobbed him, as they all reveled in the moment.

Northside head coach Jared Adams, who said Rose “was on cloud nine” when he was told earlier that day that he’d be playing, describes Northside’s newest basketball player as someone who is passionate about Panthers athletics.

“He has his own little playbook he draws up with the guys, has their names in them. He does it for basketball, he does it for football, he does it for baseball. He can tell you every athlete in the school, their number and what position they play. And he’s been that way for three years. He helps set up the gym, he fake announces over the intercom and does the announcements and everything, stays after for some practices,” Adams said. “So I said we’ve got to get this guy into a game.”

Timothy said Garrett was thrilled when he came home from school Wednesday after receiving the news, but Garrett’s excitement reached a new level when he was given his own Panthers uniform before the game.

The victory over Mattamuskeet gave Northside its fifth consecutive win, but everyone involved knew the final score wasn’t what mattered.

“Tonight was not so much about wins and losses, but the principles of sports, bringing people together and camaraderie,” Adams said.

PINETOWN — Taking a break from its conference schedule, the Panthers welcomed Washington County and its six-game winning streak into... read more