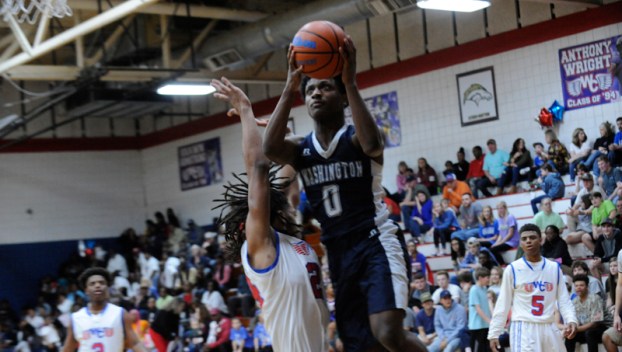 The Lady Pam Pack holds off West Craven for win

VANCEBORO — Overcoming a slow start on the road, the Washington girls basketball proceeded to control the middle stages of Friday’s game against West Craven before holding off a late Eagles’ rally to win, 37-27.

Washington (11-9, 7-5 2A Eastern Carolina Conference) took some time to get on the scoreboard Friday, not scoring until a Daria Jones basket at the 2:40 mark of the first quarter. That made the score 8-2 in favor of West Craven (8-15, 3-9 2A ECC). The Pam Pack then cranked up the defensive pressure, limiting the Eagles to nine more points through the end of the third.

Washington went from trailing by six to holding a 24-17 lead in that span. The Pam Pack could’ve led by even more, if not for some wayward shooting after grabbing offensive rebounds and stealing the ball away.

West Craven made a late push, cutting its deficit to five early in the fourth and to six points with 0:34 left in the game. But Jones and Briasia Somerville hit their free throws late to assure Washington’s victory.

Washington opens the ECC Tournament tomorrow at 5:30 p.m. with a home game against West Craven.

VANCEBORO — A promising first-half performance Friday night from the Washington boys basketball team was all for naught, as the Pam Pack began to falter midway through the third quarter and went on to lose to West Craven, 75-68.

Thanks to a hot start from behind the arc that included four made 3-pointers in the opening quarter, Washington (6-14, 2-10 2A ECC) built a 20-16 lead over West Craven (16-6, 9-3 2A ECC) through the opening eight minutes. While the Eagles used their size to control the boards, the Pam Pack leveled the playing field with the long-distance shooting provided by Omarion Blount, Jeremee Bryant and Jamauri Bryant, as well as its speed in transition.

After leading 33-31 at halftime, Washington pushed its lead to 42-37 with 5:18 left in the third. West Craven went on to take control of the game through the play of its post players, who extended possessions by grabbing offensive rebounds and finished at the rim with ease.

Both Bryants and Justin Powell managed to come up with a block or big rebound here and there, but it wasn’t enough to offset the damage done by the Eagles’ bigs. After leading for virtually the entire first half, Washington was outscored 38-26 over the game’s final 13 minutes. Making matters worse for the Pam Pack was the fact Jeremee Bryant limped off the court late with an apparent ankle injury, putting him in doubt to play in the conference tournament.

The Pam Pack opens the ECC Tournament at home tomorrow with a rematch against West Craven at 7 p.m.

Not enough offense for Lady Seahawks in loss

ROBERSONVILLE — An off day shooting the ball sealed the Southside girls basketball team’s fate Friday against South Creek, as the Seahawks couldn’t keep pace in a 59-38 loss on the road.

The Seahawks (8-12, 3-9 1A Coastal Plains Conference), who shot 26 percent from the field, found themselves in a hole early and trailed, 12-4, by the end of the first quarter. Southside managed to hold South Creek (7-17, 3-9 1A CPC) to just 10 points in the second, but the Cougars scored 37 points in the second half to put the game out of doubt.

While Southside struggled shooting the ball, South Creek, and in particular Keary Jones, had no such issue. Jones almost single-handedly outscored the Seahawks, pouring in 36 points herself. Southside especially struggled with shots from distance, putting up 23 attempts from behind the arc, but making only three shots.

While not playing with 100 percent efficiency in the opening minutes, Southside (5-17, 1-11 1A CPC) still did enough to build a lead over South Creek (4-20, 2-10 1A CPC). After holding a 8-4 lead through the first quarter, the Seahawks pushed it to 25-13 by halftime, thanks in part to Jamari Nelson and Jalen Kirkman, who scored nine and eight points, respectively, in the first half.

TRENTON — The Northside girls basketball team coasted to a 52-18 win on the road at Jones Senior Friday night after effectively shutting down the Trojans all game.

Coming off a game where it surrendered 77 points to Washington County, Northside (9-9, 6-6 1A CPC) bounced back by severely limiting Jones Senior (2-17, 2-10 1A CPC) on the offensive end. The Panthers held the Trojans to single-digit point totals every quarter, allowing only four points in the game’s second half.

Northside opened the game by putting together a 15-8 lead after the first quarter, and the Panthers’ lead grew every period as they held the Trojans to fewer and fewer points every stanza. Prentiss Thomas was very influential in the first half, scoring all of her game-high 12 points before halftime, helping Northside build a 21-14 lead at the halfway mark.

TRENTON — Led by the high-scoring exploits of Rashod Smith, the Northside boys basketball team pushed its win streak to six games with a 73-57 victory at Jones Senior Friday night.

Smith led all scorers with 35 points, missing only five shots all game for Northside (15-7, 8-4 1A CPC). The junior guard was nearly perfect from distance, making four out of five 3-pointers attempted, while also fearlessly attacking the basket like he usually does.

Smith wasn’t alone in putting points on the board for Northside, as three other Panthers scored in double digits. Kenneth Winfield supplied 12 points, while Johnathan Clark and Zach Green each had 10.

Northside’s press was also very effective against Jones Senior (4-16, 3-9 1A CPC), pressuring the Trojans into plenty of turnovers. The Panthers had 14 steals, with Clark coming away with four himself, and Smith Winfield and B.J. Paniagua each recording three.