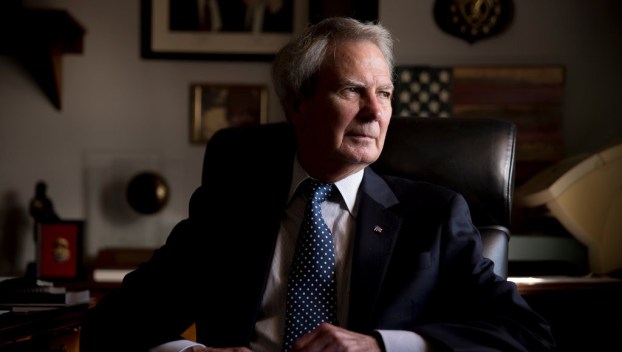 U.S. Rep. Walter B. Jones (R-NC3) died on Feb. 10, 2019, his 76th birthday, in Greenville. He had represented Tyrrell County and the Third District since 1995. (Andrew Harnik/Associated Press photo)

U.S. Rep. Walter B. Jones, 76, died February 10 in Greenville. He had represented the Third District of North Carolina, which includes Tyrrell County, since January 1995.

James W. Cahoon, Mayor of Columbia: “We are deeply saddened by the passing of Walter B. Jones, Jr. His tireless efforts to speak for and represent Eastern North Carolina will be remembered and missed by all of us. He represented the 3rd Congressional District with pride and with integrity. His values and personal beliefs certainly reflected those of the people he represented. We are grateful for his service and willingness to represent us for so many years! Our thoughts and prayers are now with his wife and family as we join them in mourning our loss.  He will be greatly missed!”

Rhett White, Columbia Town Manager: “I first worked with Walter Jones when we were in college together and active in the Young Democratic Club. He was honest and a person of his word. Over the years I found myself asking for assistance for a number of projects and programs. He always listened and helped where he could. There will probably not be another father-son duo like Walter Sr. and Walter Jr.”

David Clegg, Tyrrell County Manager/Attorney: “I worked with Rep. Jones when he was a member of the General Assembly and I was Deputy Chairman of ESC. He was very concerned with the solvency of the unemployment insurance trust fund, which was a harbinger of his tax policies later in his career. As a member of Congress I dealt with him directly, as well as his staff, as he assisted his constituents to navigate the unemployment insurance system. He was always particularly concerned about active military, retired military and military spouses and local defense contractors. I was always impressed about his devotion to the district that he would call me about specific questions while he was driving to NC from DC on the weekends. I remember when I was Assistant Commerce Secretary that he had a specific interest in a trip I took to Ireland and my visit to the Bombardier engine plant that was a defense contractor. He was quick to wish me well when I became County Manager, and he was always willing to talk about Tyrrell issues.”

Tommy Everett, Chairman of Tyrrell County Board of Commissioners: “He was a Representative who followed his conscience rather than party lines.  More members of Congress should follow his example in today’s political climate.”

Workshops to focus on Complete Streets

The North Carolina Department of Transportation will soon hold six workshops around the state to focus on Collaborative Approaches to... read more