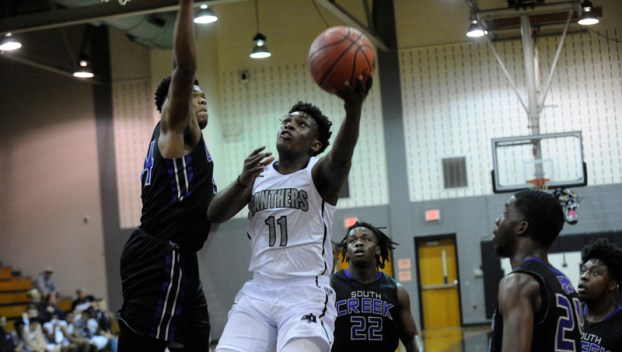 AMBIDEXTROUS: Northside’s Zach Green extends with his left hand to finish near the basket in a crowd of Cougars during Monday’s first-round game of the CPC Tournament. (Sean Finnerty | Daily News)

PINETOWN — Overcoming a sluggish start by their high-scoring standards, the Northside Panthers found their groove after halftime and dominated South Creek in the third and fourth quarters to win their first-round game of the Coastal Plains Conference Tournament, 80-56, Monday night.

As a team that entered the game averaging 79.1 points per game, Northside (16-7, 8-4 1A CPC) was uncharacteristically slow out of the gate, needing two minutes to score its first points and not reaching double digits until the 2:35 mark of the first period. South Creek (4-21, 2-10 1A CPC) on the other hand, shot well early, hitting four 3-pointers in the opening quarter. Scoring six points in the first period, Zach Green helped the Panthers even the score at 16-16 heading into the second period.

Another 3 helped the Cougars take a 21-16 lead during the first minute of the second. But Northside responded immediately to tie the game back up and the two teams traded baskets for much of the quarter, with neither squad able to pull away by more than two points. Finally finding their feet, the Panthers closed out the first half with a 6-0 run to take a 34-28 lead into the break.

Northside head coach Jared Adams said his team’s less than ideal start was due to mistakes on defense.

“We got off to a shaky start. Most of the time we were out of position on the press, out of position on defense,” Adams said. “We fixed some things at half, got a little better matchup, a better look. (It) caused some confusion for them; we were able to get some turnovers and then make those turnovers into points.”

With the adjustments made at halftime, the Panthers took control of the game in the second half. With its press beginning to work, Northside was finally able to generate turnovers and get running in the open court, leaving the Cougars in its dust. After scoring 12 points in the first half, Panthers guard Rashod Smith began to take the game over, scoring 20 points after halftime to finish with a game-high 32 points. When Smith wasn’t scything his way through the South Creek defense to finish with an acrobatic layup, he was feeding the likes of Johnathan Clark, Green and Tyler Turner.

Northside scored 22 points in the third and poured in 24 more in the final quarter, while holding the Cougars to 12 in the third and 16 in the fourth. Clark finished as Northside’s second-highest scorer with 12 points, six of which came in the third quarter. Turner, who along with B.J. Paniagua does much of the dirty work like battling for rebounds, scored 11 points, while Green had 10 and Paniagua chipped in with six points.

Even in the midst of a seven-game winning streak, Adams said there are things his team can work on.

“As the year progresses we’re doing a better job of slowing it up and running the offense, and I want to see more of that,” Adams said. “We still need to decide when’s a good time to push it and score, when’s a good time to slow it up, at this point in time. We’re getting better, but still not where I want us to be.”

With the victory, Northside moves on to the semifinals of the CPC Tournament. The Panthers will take on Riverside tomorrow at Pamlico County, with tip-off scheduled for 6 p.m.

Northside moves on in CPC Tournament after downing Southside