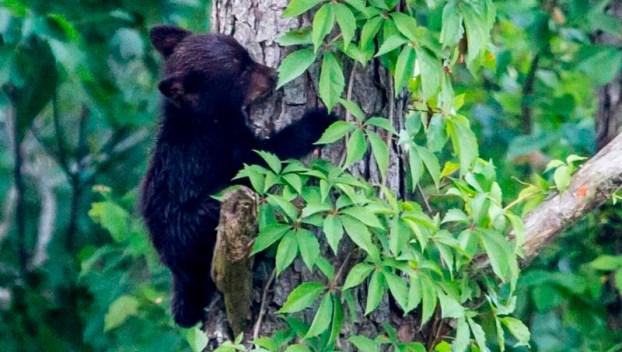 UP A TREE: At the encouragement of mother bear (sow) this young Black Bear cub has scrambled up a refuge tree to get out of the reach of perceived danger. Pocosin Lakes Refuge has what is believed to be one of the largest concentrations of Black Bears found in the southeastern United States. (Jackie Orsulak/Pocosin Lakes National Wildlife Refuges)

PLYMOUTH — For the second time in four years, the Black Bear Festival has won “Best Event” in the state from the NC Association of Festival of Events and Entertainment. The NC Black Bear Festival founder and director, Tom Harrison, happily accepted that award last week, after only four years in existence.

“It’s remarkable what a small town can accomplish with a dedicated team, loyal sponsors and the support of the community,” Harrison said. “We’re humbled to receive such a prestigious award from our peers in the industry.”

Mayor Brian Roth said, “We are super-proud and honored to receive this special recognition. The NC Black Bear Festival has had an amazing impact on the Town of Plymouth. It has created great awareness about the huge numbers of magnificent black bears on the Albemarle/Pamlico Peninsula and brought an economic resurgence to the Town of Plymouth.”

The festival, created in 2015, celebrates the little-known fact that coastal North Carolina has the world’s largest black bears. It features more than 30 educational and fun bear-themed activities for the entire family. The event received state-wide recognition in its first year, winning the “Rising Star Award” from the NCAF&E. Since then, the festival has received the Top Twenty Event Award from the Southeast Tourism Society. Last year, Bear Fest was named “Best Event” from the Southeast Festival & Events Association.

According to Harrison, the festival’s popularity has a lot to do with the wide appeal of black bears, along with a heaping helping of fun and creativity.

“No matter what age or interests a person has, almost everyone loves bears!,” he said.

Last year, guests came from more than 18 states and four foreign countries, and attendance has steadily grown from 7,000 to upward of 30,000.

The festival hosts wild bear tours, conducted on a local wildlife refuge, as well as presentations by the NC Black Bear biologists and free wildlife photography presentations. There are also more whimsical activities such as the Bear Necessities Paddle, Run with the Bear 5K, Baby Bear Contest and a children’s bear train. Last year, Harrison was able to get a designation for a National Black Bear Day to be celebrated on the first Saturday in June each year and expanded the event to include a Blackberry Extravaganza.

New events to the festival this year include a bass fishing tournament, sunset cruise on the Roanoke River and black bear theatre along with airboat rides.

The award-winning NC Black Bear Festival is happening on June 1-2 in Plymouth — “where traffic ends and the adventure begins!”