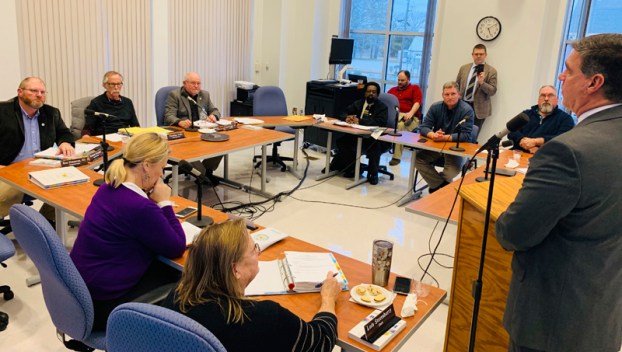 WORKING TOGETHER: Hyde County Board of Education members and Hyde County Commissioners met in their first joint meeting of the year earlier this month, discussing School Resource Officer positions, among other topics. (Hyde County Schools)

He also distributed copies of the book “Mindset – The New Psychology of Success” by Carol S. Dweck, Ph.D. to each commissioner, inviting them to join the school system in this book study. Mr. Basnight discussed how the findings of this book will be adopted by the school system to enhance the quality of the educational experience for each student moving Hyde County Schools into the future.

One of the topics of discussions for this meeting revolved around the presence of a School Resource Officer (SRO) for the mainland campus. Hyde County Manager Kris Noble pointed out that both boards were in agreement that an SRO was needed to enhance the safety of our students and staff when budget discussions took place last year, but the timing of this discussion and financial roadblocks prevented this project from materializing. She hoped to achieve a better outcome now that conversations around this topic were starting earlier.

After discussions were held regarding the purpose and duties of an SRO in a school, Basnight and Hyde County Sheriff Guire Cahoon added some important factors concerning timing to find and train a deputy to be certified and ready for the SRO position, monies already allocated to partially fund such a position, and also the need to consider an SRO on the Ocracoke school campus. Noble stated that the other option that was considered was an increased presence of deputies on the school campus, and acknowledged that it was happening since an SRO was not in place last year. Basnight expressed his appreciation for the increased presence. Both boards agreed to continue talks around concerning an SRO in future joint meetings and renewed their intent to see this project through.

Later in the agenda, Mr. Dale Cole, Director of Instructional Programs, CTE, and Assessments for the school system, made a presentation around the Career and Technical Education (CTE) Program in Hyde County Schools. He elaborated on the different programming offers and future projects as well as how the partnership with Beaufort County Community College and other organizations and entities were key factors in our success and its future expansion. Discussions were also held around the feasibility of these CTE programs also being offered on the island campus, and Mr. Cole stated that they were evaluating options in order to move forward.

Last but not least, representatives of the Hyde County Health Department presented updates on the different programs and initiatives that had been implemented to address the Opioid Crisis in the nation and locally. Thanks to a grant, programs and initiatives have been implemented in both the school system and Hyde County community. They elaborated on the success of said initiatives and their future plans to continue fighting this deadly crisis that’s affecting our nation.

This was just the first in a series of joint meetings as both Boards enter the budget season. Randy Etheridge, Chairman of the Hyde County Board of Education, expressed his board’s desire for a more open and transparent era of cooperation with the County for the benefit of all Hyde County School students. The next joint meeting is set for next month.