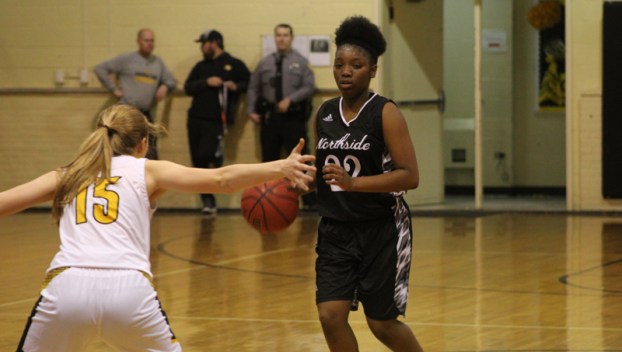 SHUT DOWN: Neither Prentiss Thomas nor the rest of her Panther teammates could generate much offense against Pamlico County Tuesday night, as they lost 79-21 in the conference tournament semifinals. (Laieke Abebe)

BAYBORO — Pamlico County flexed its muscles en route to a 79-21 win over Northside in the semifinals of the girls 1A Coastal Plains Conference Tournament Tuesday night. The two-time defending 1A East regional champion Hurricanes will play in the conference championship Friday night in their home gym. Meanwhile, the Panthers will wait to find out if they will make a return trip to the state playoffs.

“We should make the state playoffs despite the result tonight,” said Northside head coach Michelle Leathers. “We’ve fought extremely hard to get some wins over the last few weeks. This group has done everything I’ve asked them to do, and even when there were some tough games they played with a lot of effort. [Pamlico County] is a tough team to play against because of their pace and their play on both ends of the floor.”

The Hurricanes (22-2, 12-0 1A CPC) controlled the game from the opening tip. They were clicking on both ends of the floor, while the Panthers (10-10, 6-6 1A CPC) were shaken by their hosts’ great start. Pamlico County got many transition opportunities in the first half and took advantage. Northside trailed, 31-4, at the end of the first quarter and it didn’t get better in the second.

It was a 51-15 lead at halftime for Pamlico County and it led 64-17 going into the fourth quarter. The Hurricanes cruised through the second half with relative ease. Meanwhile, Northside only scored six points in the second half and the running clock started for the Hurricanes with 6:15 left in the final period.

With their conference tournament run over, Michelle Leathers and her team are hoping for a state playoff berth. Their chances were strengthened with a win over Southside on Monday in the first round of the conference tournament. The Panthers had won five of their last seven games going into Tuesday’s contest. NCHSAA playoff brackets are expected to be released Saturday with the first round scheduled to begin Tuesday.

“I think a game like this will really help us going forward,” Leathers added. “They started off extremely fast and we couldn’t keep up. When you play during this time of year, there are a lot of difficult teams to play against. My team has been shooting the ball confidently over the last few games so that will also help. In the end, we live and we learn everyday.”

PINETOWN — Overcoming a sluggish start by their high-scoring standards, the Northside Panthers found their groove after halftime and dominated... read more