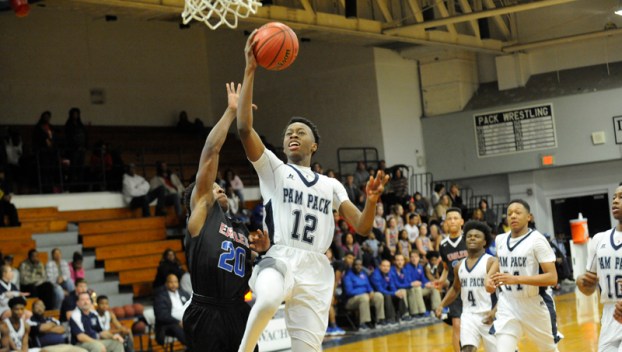 NOT ENOUGH: Jamauri Bryant finishes off a fast break with a layup during Tuesday's lost to West Craven. Bryant was Washington's leading scorer for the game with nine points. (Sean Finnerty)

WASHINGTON — After leading for much of the game but eventually losing to West Craven on the road Friday in the regular season finale, the Washington boys basketball team hoped to benefit from that experience and knock off the Eagles in Tuesday’s first-round game of the 2A Eastern Carolina Conference Tournament at Washington. But in stark contrast to last week, nothing seemed to go right for the Pam Pack, as it fell behind early and never recovered, falling to West Craven, 74-35.

“We had them on the ropes there last week, and their seniors stepped up and played well the second half. And tonight they came right at us and we just couldn’t get anything going,” Washington head coach Lane Raper said. “Everything we worked on, practice-wise, to improve on, they had adjustments for it. It was like he (West Craven head coach David Fernandez) was in my playbook.”

Similar to last Friday, when the Pam Pack (6-15, 2-10 2A ECC) drained four 3-pointers in the opening stanza, and 10 over the course of the entire game, Washington opened Tuesday’s game with an Omarion Blount 3. But unfortunately for the Pam Pack, it didn’t make another until the final quarter when the game was well out of reach.

While Washington created open looks for its shooters in the game prior, West Craven (17-6, 9-3 2A ECC) did a much better job of contesting the Pam Pack’s shots from distance Tuesday night.

“Really, it was just their pressure from the outside, us not being able to get a good shot,” Raper said. “They really picked up the intensity and just continued what they ended with on Friday.”

Not hitting its outside shots made things even tougher for the Pam Pack near the basket, where the Eagles already had the advantage with their superior size. Washington tried attacking the paint, but West Craven effectively shut down the lane for much of the night. Even when a Pam Pack player managed to reach the basket, either with a nice move to lose his defender or in transition, the layup was often missed, fueling Washington’s frustration and showing it just wasn’t the Pam Pack’s night.

Nine different Washington players got their names in the scorebook, but none reached double figures. Jamauri Bryant led the Pam Pack with nine points, while Jeremee Bryant and Blount both scored five points.

While Washington struggled to score, the Eagles did not. Getting production down low from its bigs, as well as several 3-pointers from its perimeter players, West Craven used an 11-0 run midway through the first and an 8-0 run to end the opening period to build a 24-9 advantage.

The Eagles added to their lead in the second, getting open looks on 3-pointers due to poor transition defense by the Pam Pack. When West Craven did miss, its big men were there to clean up. The Eagles scored 25 points in the second period to push its lead to 49-16 and tacked on to it every quarter to reach the final 39-point differential.

With only two conference wins in the talented ECC, it’s a long shot that Washington qualifies for the playoffs. With a team full of underclassmen, Raper wants his players to know they need to put the work in to avoid this same disappointment next season.

“We’re going talk about what we need to improve on and letting these young guys know that just because we’re going to be a year older next year, we’re not necessarily going to be better. We have got to work this summer and this offseason to get better,” Raper said.

The Lady Pam Pack holds off West Craven for win VANCEBORO — Overcoming a slow start on the road, the... read more