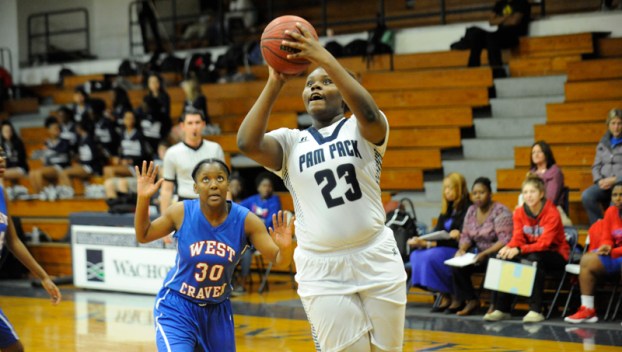 GETTING BUCKETS: Washington’s Daria Jones lines up a shot during Tuesday’s victory over West Craven. Jones’ 17 points, which led all scorers, helped pave a way to the conference semifinals for the Pam Pack. (Sean Finnerty | Daily News)

WASHINGTON — After defeating West Craven Friday in a game that was tightly contested until the final moments, Washington hosted the third meeting between the teams this season Tuesday night in a first-round matchup in the 2A Eastern Carolina Conference Tournament. This time around the Pam Pack used multiple defensive looks and strong post-play to dominate the Eagles, 48-26, and move onto the semifinals.

Under the direction of head coach Ralph Biggs, Washington (12-9, 7-5 2A ECC) switched up its defense on the fly in the first half. Alternating between different variations of zone defenses and press defenses discombobulated any game plan West Craven (8-16, 3-9 Eastern Carolina Conference) had. If Biggs didn’t switch up the defense after a timeout, fans saw it come on dead balls and even when the Eagles were in the midst of bringing the ball up the floor.

“We’ve been working on it (the defenses) the past couple weeks and wanted to get some game action with it and I think we did pretty well,” Biggs said. “It’s (the half-court press) something we wanted to try because I think they was ready for our full-court press. I think the pressure, once they crossed halfcourt, made it a scramble, a fast-paced game and it worked for us.”

Washington got off to a quick start, scoring just 25 seconds into the game, while also holding West Craven scoreless until the 3:51 mark in the first quarter. But mental errors that plagued the Pam Pack all season reemerged on offense. After leading 6-2, Washington turned the ball over repeatedly and allowed the Eagles to go on a 6-0 run to end the quarter. Thankfully for Washington, the eight first-quarter points were the most points it gave up in any quarter Tuesday. After trailing, 8-6, at the end of the first, Washington responded by scoring 15 points in the second to take a 21-15 lead into halftime.

West Craven found success taking away the lane, until Biggs made an adjustment after the half. Washington loaded up on big forwards in Daria Jones, Reagan Ruther and Briasia Somerville and loaded its offense to one side.

“I think the second half we kind of bounced back and we really turned up our motor a little bit,” Biggs said. “The younger girls, a couple of JV girls, got in for us in the second quarter and they turned the energy up for us and that set the tone for the second half.”

The offensive adjustment allowed the Pam Pack to work the ball in a cycle, and with more passing options, gave a better chance to find an open player for a shot. Even if the shot missed, Jones, Ruther and Somerville were able to grab offensive rebounds for second-chance put-backs or draw a foul. The Lady Pam Pack went 14 for 22 from the line, including 11-20 in the second half. Jones, who led all scorers with 17 points, made 6 of 8 free throws, while guard Kiaira Boomer scored nine points.

Washington padded its lead in the second half, scoring 10 points in the third and adding 17 more in the final quarter.

The win set up Washington to play the North Lenoir Hawks (13-7, 9-3 ECC) at North Lenoir in the conference semifinals tonight.

WASHINGTON — After leading for much of the game but eventually losing to West Craven on the road Friday in... read more