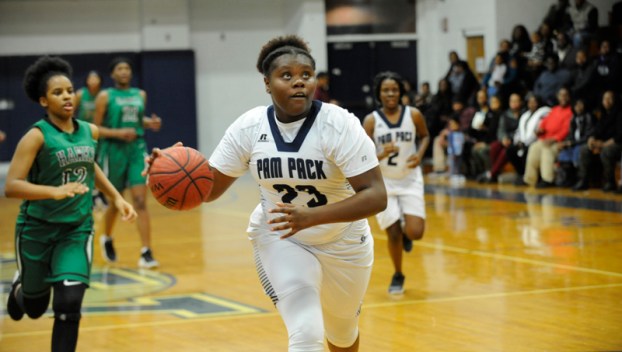 PRIMETIME PLAYER: Daria Jones eyes the basket as she goes in for a layup during the Pam Pack’s home game against North Lenoir earlier this season. Jones led the way for Washington in its semifinal win over the Hawks Wednesday night, scoring 31 points. (Sean Finnerty | Daily News)

From the Neuse News

LA GRANGE — Washington now has its shot with Kinston.

“We’ve got to be ready (for Kinston on Friday), matching their focus and playing our game,” Washington coach Ralph Biggs said. “(Against North Lenoir) the girls came out ready to play and Daria Jones hit some big shots for us.”

North Lenoir hit just one of its first 15 shots and Washington took advantage, racing out to a 16-3 lead. The Hawks battled back and got within three points, with the score 17-14, on an Alainah Kornegay basket early in the second quarter, but the Pam Pack went on a 17-2 spurt to re-establish control. Daria Jones scored 13 points with three perimeter baskets, as the Pam Pack took a 34-20 lead at the break.

Washington never let North Lenoir cut the advantage to single digits in the second half. Jones continued to score seemingly at will, finishing with 31 points.

“My teammates played a big part,” Jones said. “They got me going and I was able to knock shots down without pressure.”

As North Lenoir waits for Saturday to see its NCHSAA 2A playoff seeding, Hawks coach Howard Wooley said he knew Washington, which has won 11 of its last 14 games after a 2-6 start to the season, would be a tough opponent.

“I know they had a slow start this season, but they’ve gotten stronger as time’s progressed,” Wooley said. “They were able to get separation and we weren’t consistent enough to close (the margin), but the girls fought hard.”

The Pam Pack will take on the Vikings tomorrow at Kinston with tip-off set for 5:30 p.m.

WASHINGTON — After defeating West Craven Friday in a game that was tightly contested until the final moments, Washington hosted... read more