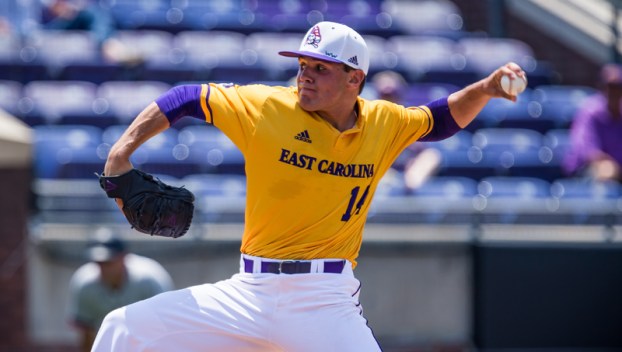 RACKING UP THE K'S: Jake Agnos picked up the win Saturday against Monmouth, striking out 11 batters and giving up only four hits in game two of the doubleheader. ECU couldn't pull off the weekend sweep, falling to the Monarchs today. (ECU Athletics Media Relations)

GREENVILLE — Despite winning both double-header games for the second straight weekend, East Carolina couldn’t pull off back-to-back weekend sweeps, as it fell in the series finale against Monmouth, 8-5, on Sunday. This marked the Monarchs’ first win of the season.

“I knew they (Monmouth) were better than what their record was, and I sensed it in the dugout when we were up 5-1, that our guys got off the button a little bit and we quit pushing forward,” ECU head coach Cliff Godwin said.

The Pirates (5-2) jumped out to a 4-0 lead after the third inning and looked to have figured out the Monarchs (1-5) for the third consecutive game as they held them to just one run through six innings. But a five-run seventh inning saw Monmouth jump to a one-run lead. Prior to that fateful seventh inning, ECU had only given up two runs across 24 innings in the series, but couldn’t overcome the big half inning. Additionally, the Monarchs added two clutch insurance runs in the top of the ninth off of a Zach Shield home run to turn a one-run game into a three-run deficit for the Pirates.

“I appreciate the way our guys battled through the ninth inning to get a couple guys on base, but we made a couple boneheaded mistakes,” Godwin said.

After giving up consecutive doubles in the seventh, starting ECU pitcher Tyler Smith was pulled after six innings of work. He was pegged with the Monarchs’ first run of the inning, after surrendering an RBI double into right field by Colin McCreary.

In came Trey Benton, who lasted just 0.1 innings after giving up two runs and a walk. He was quickly relieved by Evan Voliva, a face Monmouth had already seen in the series. However, Voliva was pegged with the loss after giving up one earned run and two hits, while failing to get a Monarch out. After throwing just five strikes to three different hitters, Godwin quickly pulled him in favor of Sam Lanier, who pitched until the ninth-inning homer. Ryder Giles came in to get the final two outs of the game.

“We’ve got confidence in everybody in the bullpen, but stuff happens,” Giles said.

Despite Godwin harping on the Pirates’ great depth, different guys across the board couldn’t finish the job in the weekend finale. According to Godwin, the aggressiveness at the plate is there, but the ability to finish is what’s still lacking with some of the younger players. On the flipside, the three relievers who gave up runs are all upperclassmen, so all around the Pirates didn’t have the type of game the program is known for. ECU relied heavily on younger guys in the series, due to the absence of Bryant Packard and Spencer Brickhouse to injuries.

“I think once again our guys thought they could coast through it until the end and that ultimately falls on me,” Godwin said. “I’m not a doctor, but Packard isn’t ready to swing a bat yet and I’d say Brickhouse will be ready after Packard.”

The absence of Packard and Brickhouse did little to hinder the confidence of Thomas Francisco and Giles, however, as the two accounted for all five ECU runs. Francisco hit two home runs in consecutive at-bats and Giles hit a bases-clearing double in the bottom of the second.

“Yeah, we’d like to have them in the lineup, but we have guys that can fill those roles,” Burleson said.

Doubles seemed to be the story for the Pirates in game two of the doubleheader against Monmouth on Saturday, as ECU hit five straight doubles in the bottom of the third inning. Giles, Nick Barber, Burleson, Worrell and Washer hit in order to rack up a quick 4-0 lead. ECU added six more runs across the remaining six innings as it took game two, 10-0, for the second straight weekend doubleheader sweep.

Starting pitcher Jake Agnos picked up the win, lasting seven innings and giving up four hits, while striking out 11 Monarchs.

ECU brought in one run in both the the first and second innings before keeping it a tight 2-1 game until the bottom of the seventh, when Washer hit an insurance solo home run that ended up being the final score of the game.

ECU will play a midday game Monday when Air Force comes to town for the first of two weekday games for the Pirates this week. Sophomore Jake Kuchmaner will be on the mound for the Pirates.