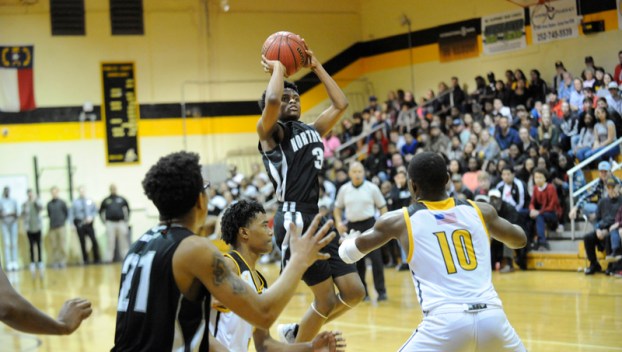 RISING UP: Rashod Smith pulls up for a jumper in the face of a Hurricane defender during Friday’s loss to Pamlico County in the conference tournament championship. (Sean Finnerty | Daily News)

BAYBORO — Possessing a 19-point lead after a dominant first half, Northside looked to be in the driver’s seat of the Coastal Plains Conference Tournament championship game Friday night. But Panthers’ foul trouble and vociferous support from the home crowd urging on the Hurricanes helped Pamlico County battle back to take the tournament title with a 66-61 win.

Panthers star guard Rashod Smith and Zach Green, who led Northside (17-8, 8-4 1A CPC) with 18 points, picked up their fifth fouls late in the game, making it that much more difficult to hold off the surging Hurricanes (14-7, 11-1 1A CPC).

“When you get a couple quick whistles (to open the second half) and you go from having two fouls (to) having four fouls, and all five of my starters had four fouls, and then I lose two of them, that’s a big deal, especially when they’re your go-to players,” Northside head coach Jared Adams said. “But they cut it to 10, and then we were up (with) about four minutes left (by) about four (points), and then they cut it to two. It was kind of back and forth. We missed some shots, had some missed opportunities. But all in all, played a solid basketball game.”

The game couldn’t have started any more brightly for the Panthers. Thanks to stellar defensive play and active hands on defense, Northside repeatedly stole the ball away and limited Pamlico County to eight points in the first quarter and 12 more in the second. The Panthers silenced the crowd as Smith and Johnathan Clark both collected four steals, which led to Northside baskets in transition.

With Smith, who finished the game with nine assists to go along with 11 points, directing the offense, Green and Clark provided most of the points early on. Clark scored seven points in the opening quarter to help guide the Panthers to a 19-8 lead through the first. Green caught fire from behind the arc in the second, hitting three 3-pointers in the period’s first three minutes.

A Clark layup on a fast break after a Smith steal gave Northside a 39-14 lead with 1:25 left in the first half. But Pamlico ended the half on a 6-0 run, building a little bit of momentum heading into the second half.

The third quarter saw the Hurricanes forcing turnover after turnover, and the Hurricane fans grew louder and louder as Pamlico County chipped away at Northside’s lead. The Panthers slowed down its pace of play to bleed some clock, but the Hurricanes successfully pressured Northside into turnovers, as Pamlico County scored 33 points in the third while limiting the Panthers to 13. Heading into the final quarter, Northside saw its lead shrink with the scoreline reading 48-40.

During the official timeout between the third and fourth quarters, the Pamlico fans and the section of visiting Northside fans battled back and forth through chants, with the Hurricane supporters eventually drowning out the visitors with their greater numbers. That is exactly how the fourth quarter played out on the court as well, with the Panthers not able to keep up late as Smith and Green had fouled out.

A Pamlico County 3 at the 5:25 mark of the fourth gave the hosts a 53-52 lead, their first of the game. The crowd erupted when the ball went through the net, and became even louder 17 seconds later when Smith was called for a charge, and fifth foul of the game, ending his night. The Panthers fought bravely over the game’s final minutes to even the score multiple times when Pamlico County pulled ahead. But when Green fouled out as well, Northside didn’t quite have enough to keep up, only scoring two more points after a B.J. Paniagua basket made it 59-59 with 2:25 left.

Paniagua ended the game with 11 points and six rebounds, while Clark scored 10 points, Kenneth Winfield had seven and Tyler Turner chipped in with four.

Having won eight consecutive games before Friday’s loss, combined with the improved performance in a hostile environment against a Hurricanes team that had already beaten Northside twice, including a lopsided defeat the first time around in Bayboro, Adams said his team received some “positive reinforcement” heading into the playoffs. But at the same time Adams needs to make sure his team is in the right mindset heading into the playoffs so soon after a loss that left his players looking dejected.

“It’s tough,” Adams said. “Honestly, what you have to do is you have to look at it as a new season; it’s a clean slate. We can no longer look at conference. Your record basically goes out the window, now you’re focused on playoffs. And we need to be thankful. Many teams didn’t make it to the playoffs.”

Northside received the No. 17 seed and travels to No. 16 Weldon tonight for a first-round matchup in the state playoffs. Tip-off is set for 7:30 p.m.

By LAIEKE ABEBE From the Kinston Free Press KINSTON — The top-seeded Kinston Vikings won the opportunity to host the... read more