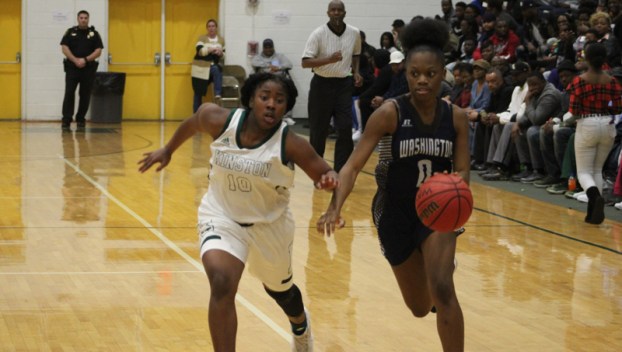 KINSTON — The top-seeded Kinston Vikings won the opportunity to host the 2A Eastern Carolina Conference girls tournament championship with an undefeated record in conference play. Washington, a team that has played well since Christmas, came into the title game looking to pull off a road upset. While the Pam Pack nearly won the game, the Vikings dug deep at the end to win, 45-42, and take the conference crown Friday night.

“It’s so great to win the conference championship as a senior,” said Kinston guard Samantha Lee. “We worked really hard to get the job done and we just have to work hard and stay locked in going forward.”

Kinston (21-5, 12-0 2A ECC) came out of the gate hot with a 7-0 run. Meanwhile, Washington (13-10, 7-5 2A ECC) turned the ball over a lot in the first couple of minutes, but the Pam Pack recovered nicely and kept the game close. The Vikings led 13-9 at the end of the first quarter on the strength of junior center Anzaryia Cobb. She set the tone with a couple of tough finishes at the rim and excellent rebounding.

Similar to their first half against South Lenoir on Wednesday, the Vikings struggled to extend their lead. That’s because the Pam Pack was cool in a hostile environment. The second quarter featured a lot of end-to-end action, and both teams couldn’t convert their layups. Washington had a slightly better stretch before halftime, but it was Kinston clinging onto a 20-19 halftime advantage.

The Pam Pack continued its stellar defensive effort in the third quarter. Kinston played a methodical and safe period trying to get a quality shot every time down the floor. Because of some great defensive rebounding, Washington found itself in a great position. A layup at the buzzer by Reagan Ruther gave Washington a 31-29 lead going into the fourth quarter.

Kinston had to dig deep for answers in the final eight minutes of the game. Both teams traded baskets in an intense fourth quarter with lead change after lead change. A lot was at stake and both teams got after it on both ends of the floor. The Pam Pack’s Cyntavea Blackledge and Samantha Lee traded baskets to make the score 42-42 in the final minute.

Sheriece Jones hit the go-ahead free throw for the Vikings with less than 35 seconds left, and while she missed the second, a costly turnover from the Pam Pack gave Kinston the ball back. Lee, one of the Vikings’ senior leaders, calmly sunk two free throws to add to their lead.

Despite a great game from the Pam Pack, it was not meant to be for a second straight season, as Washington fell in the conference tournament final to Kinston last year as well. Kizoria Redmond’s 3-point shot came up short at the buzzer and the Vikings celebrated a win on their home court.

“I hate it for the girls,” Pam Pack head coach Ralph Biggs said. “We played so hard, but we came up short. My girls did everything we could do to win the game and I have no complaints about our performance. They’ve been playing so well over the last few weeks to get to this point and all we wanted was a chance. My team played their hearts out and that’s all I can ask for.”

Washington will now move forward with the state playoffs and as the No. 24 seed will travel to play No. 9 Randleman today at 6 p.m.