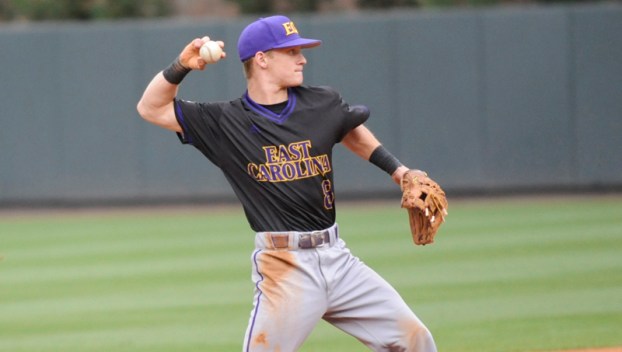 SLICK FIELDER: ECU shortstop Turner Brown provided his usual reliable defense yesterday against Air Force, but like many of his teammates, couldn't come up with the offense to propel the Pirates to victory. (Michael Prunka | Daily News)

GREENVILLE — Only recording one hit through the first seven innings, East Carolina dropped its Monday contest to Air Force, 3-2, after the Falcons’ Gabe Martinez blasted a go-ahead solo home run in the top of the ninth.

“I thought our guys were ready to play, (but) today, Air Force was better than us,” ECU head coach Cliff Godwin said. “They were one run better than us, they played a little bit better, their pitchers kept us off balance, so hats off to them. I can live with a loss like this.”

For a moment bigger than baseball, ECU’s Air Force ROTC Color Guard presented the flags and colors prior to the scheduled first pitch to honor its opponent’s hard work and dedication off the field for the United States of America. The Air Force Academy (5-3) showed its power on the field too, as it racked up eight hits and held a high-powered ECU (5-3) offense to just three.

The Pirates took the lead in the second inning after Falcons starting pitcher Zach Argo threw 16 pitches amounting to two walks in the second. Brady Lloyd followed by guiding a sacrifice bunt down the right field line and was punched out halfway to the bag. However, Turner Brown made it home from third easily, allowing Lloyd’s sacrifice to earn him a RBI. The inning was extended due to a call for the inning’s third out was overturned, after assistant coach Jeff Palumbo jumped and screamed from the first base coaching box for Godwin to challenge a double-play ball that called Lane Hoover out at first.

ECU took the 1-0 lead into the top of the fourth inning when Air Force’s Drew Wiss hit a floating home run over the right field wall. On the ensuing at-bat, Ashton Easley cranked a triple over Hoover’s head and into deep center field, putting him in scoring position. It was Easley’s second triple in eight games to begin the season. He was driven home the next at-bat, when Martinez hit an RBI groundout.

Air Force held the same 2-1 lead until the Pirates added two more hits and a run in the bottom of the eighth. Leading off the inning, Ryder Giles smacked a double to jumpstart ECU’s offense and put himself into scoring position. After advancing to third on a Bryant Packard groundout, Giles crossed the plate on an Alec Burleson single to center. After being unable to take advantage of Burleson on base in the eighth, ECU had a poor showing in the bottom of the ninth that saw three quick outs for Brown, Seth Caddell and Hoover in that order.

Packard, the reigning American Athletic Conference Player of the Year, was left after the game wanting more from the Pirates’ offense.

“I think we could have played a lot better. I wish we executed,” Packard said. “I do wish that we flipped our approach in the later innings. I don’t think offensively we really executed what we wanted to do. (Us) adjusting the bat late-game is what I would have changed.”

In an off day at the plate for ECU, Burleson picked up two of its three hits while registering one RBI, and Giles added the other RBI on his one hit. Burleson was named the American Athletic Conference’s Player of the Week earlier in the day.

The Pirates will play their second midweek game of the week tomorrow at home against in-state opponent Elon before hosting the annual Keith LeClair Classic, which begins Friday.

BAYBORO — Possessing a 19-point lead after a dominant first half, Northside looked to be in the driver’s seat of... read more