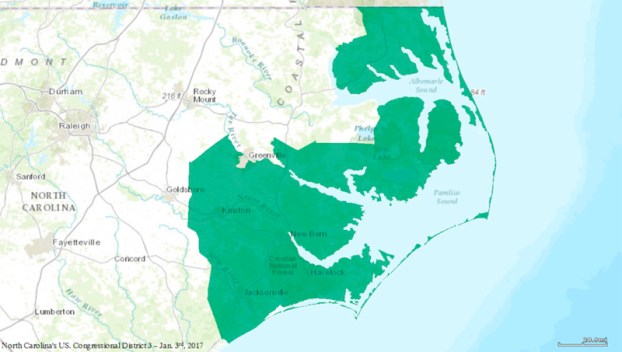 A CROWD: Voters can expect a crowded field during special elections to fill the Third Congressional District seat, which was left vacant by the passing of Congressman Walter Jones Jr earlier this month. (U.S. Census Bureau)

The dates are set and filing begins next week for Congressional hopefuls who want to represent North Carolina’s Third Congressional District in a seat left vacant by the passing of Walter Jones Jr.

Governor Roy Cooper announced the new dates for a special election to fill the seat on Wednesday. The winner of the election will fill out the remainder of Jones’ unexpired term in the U.S. House of Representatives, which lasts through 2020.

“People in eastern North Carolina need a voice in Congress,” Gov. Cooper said in a press release. “We’re moving ahead so they can choose their new representative quickly.”

Filing with the N.C. State Board of Elections begins Monday, March 4, and will continue all next week through Friday, March 8. A special primary election will be held on April 30, to select candidates from what may prove to be a large field. Absentee voting for that primary will begin on March 15, 2019.

Going into the race for the open seat, the field will be nothing if not crowded. Four Republicans and two Democrats have publicly announced their intentions to run for the seat, with a number of others filing statements of candidacy with the Federal Elections Commission.

Republican contenders whose announcements have been confirmed by the Republican Party include:

Democratic candidates whose announcements have been confirmed by the Democratic Party include:

In addition to the candidates confirmed by each party, the following individuals have filed statements of candidacy with the Federal Election Commission:

CHOCOWINITY — A Chocowinity woman has begun efforts to raise funds for a scholarship to be presented in memory of her late... read more