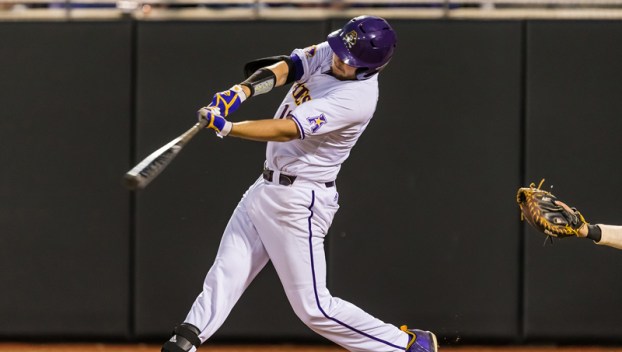 ALL-AMERICAN: Alec Burleson excelled at the plate and on the mound this seaosn and received first-team All-American honors along with teammate Jake Agnos. (ECU Athletic Media Relations)

GREENVILLE — East Carolina saw its winning run come in the bottom of the second inning after it put up a three-spotter in the first, before defeating in-state opponent Elon 5-3 on Wednesday in its second midweek game of the week.

ECU (6-3) jumped out to an early 3-0 lead in a seven-batter first inning, as leadoff hitter Bryant Packard took the first pitch of the game down the third base line for an easy bunt, taking advantage of an immediate shift from Elon that saw the Phoenix’s third baseman lined up behind second.

Starting pitcher Jared Wetherbee then threw four balls in his next five pitches to walk Brady Lloyd, before Alec Burleson had a short infield hit in between the pitching mound and second base. Burleson ended up safe at first however after an error by Elon’s first baseman Joe Satterfield, also allowing Packard to advance from third and score easily. Burleson did not get the RBI on the play due to the error, but it later counted once he crossed the plate on Ryder Giles’ sacrifice bunt three batters later. Giles’ bunt then became unearned due to the same first baseman error.

Elon took no time cutting into the Pirates’ deficit, as Tyler Cranston hit a two-run double down the left field line got past a diving Giles. But the Phoenix couldn’t put any more runs on the board until the eighth inning. That ultimately ended up not being enough.

The Pirates added a run in unexpected fashion in the bottom of the second with Nick Barber doing all the work. After smacking a stand-up double to the right field corner, Barber stole third base the ensuing at-bat before stealing home during Lloyd’s at-bat. Lloyd was down to his final strike, as well as the Pirates’ final strike of the inning, and Barber took off running right as Wetherbee released the ball and slid face first through the bag before the tag came down. Barber was the first Pirate to steal home since Ben Fultz did so against Old Dominion seven years ago in 2012.

“He (the pitcher) was being really slow to the plate from the wind-up, so Coach Godwin kind of came up behind me and said something about it. I asked him if he wanted me to do it right now (steal home plate) and he said yes so I just kind of went for it,” Barber said. “That’ll be the first time ever (stealing home) and probably the only time I’m going to guess. I was a little (surprised), but it all happened in about five seconds between him saying it and me it actually happening so there wasn’t really any time to think about it.”

Burleson later helped tack on an insurance run for ECU with a solo shot on the first pitch in the sixth inning. Burleson went 3-for-4 from the plate, collecting one RBI and two runs while moving his season batting average up to .588. Burleson was also the only Pirate to have a multi-hit game, as Packard, Jake Washer, Bryson Worrell and Nick Barber accounted for the other four.

Starting pitcher Gavin Williams won his first game of the year in his second appearance and Giles moved from third base to pitcher to close out the game and earn his first career save. Williams went 5.0 innings with four hits, two earned runs, five walks and six strikeouts on 94 pitches. Giles’ save was earned with 1.0 inning pitched with nine pitches to retire the final three batters.

“I wanted to get Ryder (Giles) out there, he hadn’t been out there and I have a lot of confidence in him that he’s going to fill up the strike zone,” Godwin said. “You’re really going to have to hit him to beat him, so he came in and did a great job.”

The Pirates look ahead to their annual Keith LeClair Classic this weekend that sees Utah, Wright State and Western Carolina come to town. The Classic will showcase three games for each team on each day of the weekend series. ECU will see the Utes on Friday, the Raiders on Saturday and the Catamounts on Sunday.

“What we did tonight, we pitched really good, we played really good defense and we put together a lot of quality at-bats. We need to stop worrying about who we’re playing and just play our best baseball,” Godwin said.