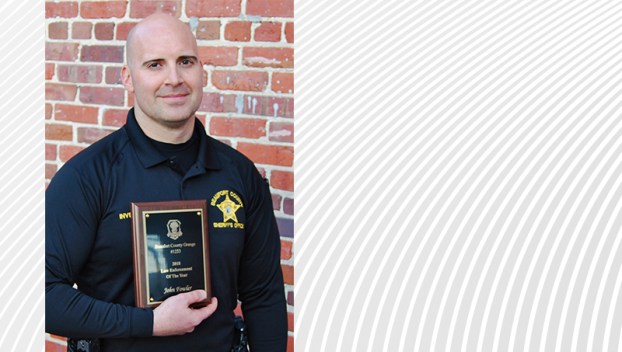 DEPUTY RECOGNIZED: Jonathan Fowler, an investigator with the Beaufort County Sheriff's Office, is the recipient of the "Law Enforcement Officer of the Year" award from Beaufort County Grange #1233. (Kevin Scott Cutler)

Jonathan Fowler is a family man, church leader, community volunteer and an investigator with the Beaufort County Sheriff’s Office.

And according to members of Beaufort County Grange #1233, he’s a fine law enforcement officer.

Fowler received the “Law Enforcement Officer of the Year” award, which was presented to him by the grange last November. He said he’s proud of and humbled by the experience.

“It’s a recognition of public service,” Fowler noted. “They have teacher of the year, law enforcement, first responder, minister of the year. It’s an incredibly humbling honor to receive.”

Fowler said he shares the honor with the rest of the sheriff’s office staff.

“It is a collaborative effort; that’s one of the neatest things about our sheriff’s office,” he said. “We have an interactive, close knit relationship.”

Fowler grew up in Jacksonville and he and wife, Jennifer, decided to make their home in Beaufort County in 2005. At the time, he operated his own construction company, designing and building homes. He still dabbles in that line of work when not busy with job and family obligations.

The Fowler family – which now includes son Isaiah and daughters Bella, Naomi and Ali – have made a home in Washington.

“I love the small town feel and I love the waterfront,” Fowler said. “I’ve always loved being around the water.”

Along the way, Jonathan and Jennifer became foster parents while trying to start a family of their own. He said he saw a need in the community and that contributed to his decision to pursue a career in law enforcement.

“We got a call in 2010 that there was a baby boy at the hospital who needed a home,” Fowler recalled. “We immediately said ‘yes’ and we were at the hospital within 45 minutes. Then the following week we found out we were expecting a baby.”

Fowler studied marine biology at the University of North Carolina in Wilmington, but with his sights on a new career he entered the Pitt Community College law enforcement academy in 2011. He graduated the following year and began working with the sheriff’s office in August 2012.

“I began as a telecommunicator and reserve deputy,” he said. “That was a great learning experience, to see the 911 aspect of the sheriff’s office. Then, after a month, I took a position in the patrol division. I was on patrol for six months when I was promoted to corporal and became a shift supervisor.”

In 2014, Fowler joined the CID (Criminal Investigations Division), where he remains today.

“All the cases we deal with, we all work together as a unit,” he said. “We have a lot of interaction with state and federal agencies, and that gives us a lot of opportunities to advance our technical techniques we utilize here at the sheriff’s office.”

Fowler added that every division within the sheriff’s office works together as a cohesive unit. And advancing their skills is a priority.

“We send our officers to field training and give them other opportunities to obtain certifications,” he pointed out. “In the end, it better serves the Beaufort County Sheriff’s Office and the community we serve.”

The Fowlers are active members of First Christian Church in Washington, where Jonathan and Jennifer both serve as deacons. Ever sensitive to the needs of the children of Beaufort County, Fowler has served as a coach for soccer, tee ball and baseball.

Blessed by his own family, Fowler is a vocal advocate for foster parenting.

“Jennifer and I have been foster parents for 10 years,” he said. “There’s such a need not only here in Beaufort County but nationwide for people to get involved. A lot of time, that’s the only resource these children have.”

For children with special needs, an event Saturday at First Church of Christ will offer a morning of fun and... read more