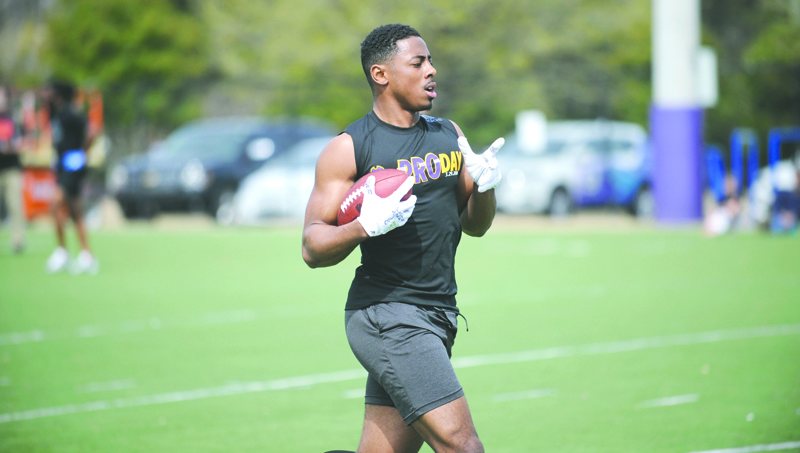 During his time as an East Carolina football player, Jimmy Williams displayed his passion for helping out the community quite regularly, whether it was volunteering his time to the Special Olympics as a coach/event-day coordinator, visiting patients at the James and Connie Maynard Children’s Hospital at Greenville’s Vidant Medical Center, working with the Food Bank of Eastern North Carolina by packing and distributing food to needy families or visiting Pitt County Schools and Beaufort County Schools as a guest speaker.

Now, the speedy wide receiver has shifted his altruistic aims to his hometown community of Washington and will hold the inaugural Jimmy Williams Youth Football Camp on June 29 on his old stomping grounds of Wagner Stadium at Washington High School.

Williams, who starred as a Pam Pack player before moving on to be a Pirate, has wanted to hold his own football camp for quite some time now.

“It was something that I always aspired to do, just growing up,” said Williams, who’s currently working out and preparing himself to play professional football. “I watched (former Pam Pack, ECU and NFL player) Terrance Copper do his camp and I always just wanted to have a camp in my hometown after — actually during — playing football. And it’s just been on my mind lately. And I just thought that it’d be a great idea to do, just have the youth come out and have something to do during the summer time.”

The free camp, which is for boys and girls ages 5-17 and will be instructed by current and former pro players and coaches, will be filled with fun, competition-based drills from 10 a.m. to 2 p.m., according to Williams. Campers will also be provided a light breakfast before and lunch during the camp.

Having the camp be a fun-filled event for the kids, along with providing top-notch football knowledge, is important for Williams. Prizes and trophies will be handed out and a DJ will be on hand to give the camp a festive environment. With fun being one of the main goals of the camp, Williams said a dance contest might be one of the competitions as well.

“There’s going to be a lot of gifts given out, as far as the camp goes, just to inspire the kids to want to compete, want to do good,” Williams said. “And also for the community as well, just to give back, just to kind of receive some things as well as part of the camp. Because that’s the main focus, involving the community with the kids to help them get ready for the future and help them be successful as they can possibly be. That’s my biggest goal running this camp.”

Williams’ desire to give back and specifically focus on the youth stems from his own upbringing in Little Washington. While he excelled in football and went off to a four-year university, Williams said he saw many friends put themselves in bad spots due to not having a good role model or someone to look up to.

“A lot of my friends, they got into a lot of bad situations and a lot of bad things, simply because they didn’t have the guidance, they didn’t have the leadership and they just kind of took away the opportunities that they had in life, just because they didn’t have that guidance and leadership. That was something that hurt me over the course of my life, taking that right path, not being able to have any friends there with you to share all these things with you because of the lives that they’re living. I don’t want anyone else to have to feel that type of pain, so I really want to give these kids the opportunity to really be something, to do something, so that they don’t make the wrong decision,” Williams said. “(I want to) help people be everything that they want to be, whether it’s sports or not. I just want to help people, because I didn’t have that growing up, and I think that’s where it comes from the most.”

The camp is open to the public and Williams is encouraging people to attend to support the kids, not only when playing on the field but in all aspects.

“I just want people to come out, show support for the kids, as well as encourage them throughout life, so that they’re in a good spot to be successful,” he said.

Registration for the camp can be completed at Jimmywilliams.eventbrite.com and will be open until June 1, or until all 200 camp spots are taken. For more information, send email to DSJOhnsonnn@gmail.com. If no response within 48 hours, contact williamsjames2826@yahoo.com