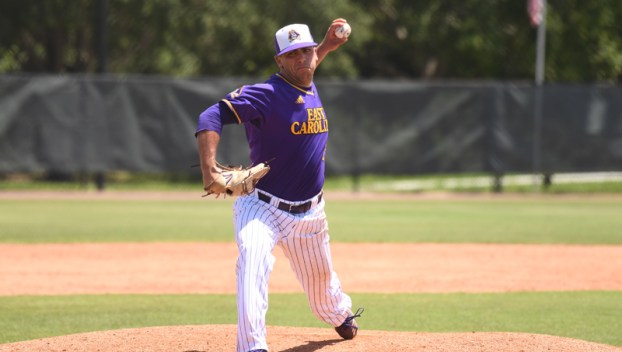 OXFORD, Miss. — Sophomore pitcher Jake Kuchmaner was one out away from becoming the eleventh East Carolina pitcher in program history to throw a no-hitter yesterday at Ole Miss. He lost the bid on a 1-0 count single with the Pirates leading 3-0. They eventually held on for a 3-2 win, rebounding from a three-run loss to Mississippi State just one day prior.

Before Thomas Dillard broke the no-hit bid, Kuchmaner recorded a career-high nine strikeouts and allowed just two base runners through 8.2 innings, due to plunking a Rebel batter with a pitch and a strikeout wild pitch. ECU (9-5) built its 3-0 lead in the top of the fourth. Bryant Packard led off the inning with a double, which was followed by a Brady Lloyd single that moved Packard to third. Spencer Brickhouse then had the honor of opening the scoring by hitting his second home run of the season, a three-run shot over the right field wall. It was Brickhouse’s second career home run at Ole Miss’ (9-3) Oxford-University Stadium.

That was virtually the extent of the offensive action until the ninth inning, as there were a total of seven combined hits from the two squads. Packard led off the game with a single, and other than the runs produced in the fourth, the Pirates didn’t have another hit until Brickhouse smacked a double in the top of the ninth.

After Kuchmaner gave up the no-hitter, ECU head coach Cliff Godwin turned to the bullpen and brought out Alec Burleson to put the game away. Burleson suffered a leg injury in the Keith LeClair Classic finale on Sunday, and Godwin said he’d miss some time, but the slugger appeared seemingly with no injury against Ole Miss and is on track to reenter the line-up.

Burleson, however, allowed a two-run single to cut the Pirates’ lead to just one, at 3-2, before loading the bases. He was then pulled in favor of Sam Lanier, who ended the Rebels’ rally and the game when he got Cooper Johnson to pop out after getting ahead in the count 0-2.

ECU struggled in the first leg of its Mississippi road trip Tuesday at Mississippi State (11-1), picking up just four hits in a 4-1 loss to the Bulldogs.

Mississippi State used a committee approach against the Pirates, as it used six pitchers who got no more than 3.0 innings each, with the first four allowing one hit each. The Bulldogs plated a run early in the bottom of the first, but ECU starting pitcher Gavin Williams put together a solid showing as he went 5.0 innings and allowed just two earned runs on four hits. Williams did pick up the loss as he left the game with Mississippi State leading 2-0, but recorded two strikeouts and issued three walks in his 21 batters faced.

The Pirates’ lone run came in the top of the sixth inning, thanks to a Turner Brown RBI-double. Christian Jayne, who was pinch running for Thomas Francisco after the freshman drew a walk, rounded all three bases to score on the Brown hit.

The Pirates will face the Marist College Red Foxes (4-5), who have yet to play a home game, this weekend in a three-game series. ECU’s weekend rotation is still undecided according to an announcement from Godwin on Sunday.