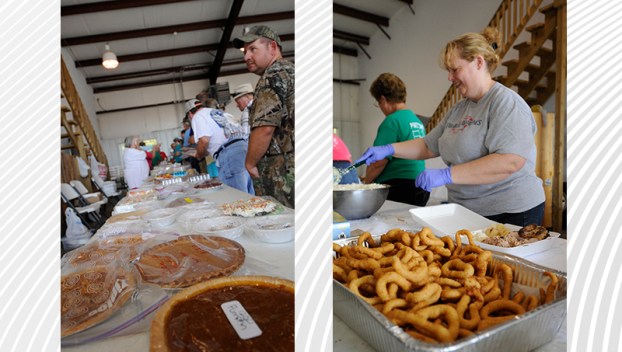 GOOD EATS: Desserts line the tables where patrons pass to pay for their chicken, barbecue or combo plates. Many patrons of Pinetown’s annual fundraiser come for these tasty treats alone; A pan of hushpuppies awaits placement on a combination plate of barbecue and chicken at a past joint Pinetown Volunteer Fire Department and Rescue/EMS Department fundraiser. (Vail Stewart Rumley/Daily News)

It started simply enough: a fundraiser for the fire and EMS station, and a goal to sell 400 plates of barbecue. These days, people line up by 10 a.m., more than 1,500 plates are loaded up with barbecue, chicken, potatoes, coleslaw and hushpuppies and they’re sold until the food runs out.

“We try to fix it to where we run out of everything at the same time, but very seldom does that happen,” laughed Butch Oliver, captain of Pinetown Rescue and EMS, and a firefighter. “And if it all goes well, we’ll be sold out by 2 o’clock; if possible, that‘s what we hope for.”

Saturday, the Pinetown Volunteer Fire and Rescue/EMS squads will host their spring fundraiser at the station on North Boyd Road. Plate sales start at 11 a.m., but that doesn’t stop people from showing up early for first dibs on barbecue and the many desserts supplied by the Ladies Auxiliary and other neighborhood contributors.

“Everybody’s got their own special dessert, whether it be a coconut cake or a pineapple cake or whatever — if it’s sweet, you name it, it will be there. Some people come just to get the desserts,” Oliver said.

Many hands contribute to the fundraiser, from shopping for supplies to manning the cookers overnight.

“It starts on Friday, about 3 o’clock, with getting the pigs on, starting to cook the barbecue, then people will start trickling in throughout the afternoon. We’ll peel about 600 pounds of potatoes starting at 6 o’clock,” Oliver said. “My primary jobs are making potatoes and making tea.”

The fundraiser’s rise in popularity came after the departments switched from purchased barbecue to cooking their own.

“It’s the same group of guys cooking every year, and I don’t know that there’s really a secret recipe to it, but we’ve done it the same way for so long,” Oliver said. “Somewhere around 2000, we decided to cook our own barbecue, and started to include chicken, and it just became a big hit. Doing our own barbecue has been the best selling point. It’s a lot more work; it takes a lot more people to do it this way.”

The payoff, however, is funds to buy needed items such as equipment, and to finish construction on the Long Acre substation, which has been several years in the making.

“The building is occupied, but not completely finished,” Oliver said. “We’ve got trucks in the building, and we’re using the building as needed right now, but we’ve still got to do some finish work on it.”

The event is a joint fundraiser for the squads that share a building, and many of their rosters are members of both departments.

“It’s like a family — in a small community, it’s like getting together for a family reunion,” Oliver said. “We look at it as not only a fundraiser but a service to our community.”

A “laugh feast in the east” is coming to Washington this weekend. The second-annual Washington Comedy Fest is set for... read more