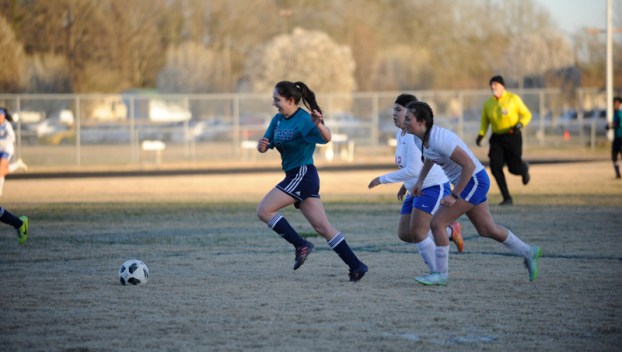 CHOCOWINITY — Unable to convert on some early chances, the Southside girls soccer team was punished by West Craven as the Seahawks fell at home yesterday to the Eagles, 3-0.

The game started with Southside (0-2 1A Coastal Plains Conference) and West Craven (1-1 2A Eastern Carolina Conference) playing rather evenly with each other, as neither team could take control. The Seahawks, who lost seven seniors from last year and have several players who’ve never played high school soccer before, enjoyed some possession in the Eagles’ end of the field roughly 15 minutes into the game, but Southside’s best scoring chances came in transition.

Junior forward, and last year’s leading scorer, Sindy Chavez Pullman provided the Seahawks’ best scoring threat on the night. She had several lung-busting runs in the game’s first 20 minutes that saw Chavez Pullman break through West Craven’s backline. But unfortunately for Southside, West Craven’s goalkeeper was up to the task and kept the game scoreless.

After the Seahawks couldn’t cash in with a goal or two, West Craven capitalized on a pair of Seahawk mistakes to take a 2-0 lead in a five-minute span. First, the Eagles pounced on a slow pass back to the goalie and finished past an onrushing Carleigh Findley, who was hung out to dry. Then the Eagles intercepted a weak goal kick and scored again.

Findley did her best to keep the score 2-0 in the second half, stonewalling the Eagles on a breakaway. But a Southside handball in the box gave West Craven a penalty kick, which the Eagles put away for the third goal.

Southside is hitting the road to take on Cape Hatteras today at 5 p.m. 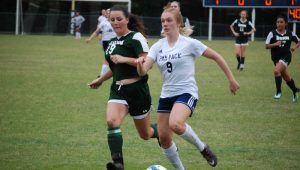 ELIZABETH CITY — The Washington girls soccer team picked up its second victory in as many days, dismantling Pasquotank County, 7-0, on the road yesterday.

Led by the stellar play of Lilly Frances Lobos, the Pam Pack (2-1 2A Eastern Carolina Conference) scored early and often to take a 6-0 lead over Pasquotank County (0-1-1 2A Northeastern Coastal Conference) in the first half. Playing in a more central role this season after scoring 48 goals and racking up 24 assists as a winger last year, Lobos scored four times and set up two goals in the first half, before scoring a fifth goal in the second half.

Lobos did much of her damage dribbling past Panther defenders all game, including on her assist to Alyssa Villegas. Attacking the Pasquotank box from the left flank, Lobos centered the ball as Panther defenders collapsed on her, finding Villegas for the first-time finish. Lobos’ other assist came from a corner kick, which Claire Shepherd knocked into the goal.

After graduating 12 players from last season and with only one senior on this year’s squad, Washington is light on players with prior experience at the high school level. Goalkeeper in particular is a position short on experience, thus Pam Pack head coach Ed Rodriguez had freshman Alexa Davenport and sophomore Arissa Kim split time in goal. The duo combined for the shutout, as Davenport recorded six saves and Kim had three.

Washington is making the trip to Wilson tonight to take part in the Brittany Soccer Showcase, where the Pam Pack will face off against Cleveland at 7:30 p.m.

During his time as an East Carolina football player, Jimmy Williams displayed his passion for helping out the community quite... read more