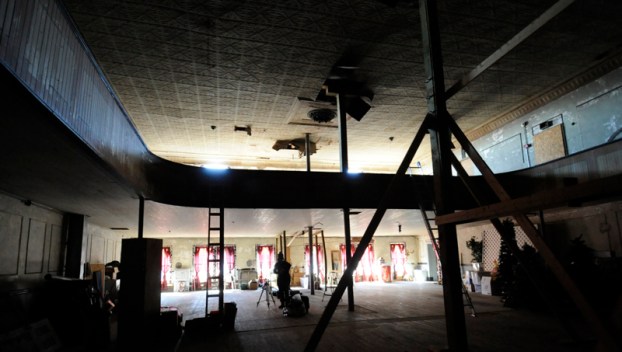 WORK NEEDED: With sections of its 106-year old roof beginning to fail, the Turnage Theatre needs the public’s help. An Arts of the Pamlico capital project needs between $455,000 and $500,000 to rebuild the roof. (Vail Stewart Rumley/Daily News)

“To guide this large project, we have been working with our historic preservation partners and a qualified engineer over the last several months,” AOP Director Debra Torrence wrote in a letter to patrons this week. “A structural roof design plan and estimate was completed in August 2018 by Curtis McLawhorn Engineering, thanks to the support of a private donor and the National Historic Preservation Fund.”

The engineering firm’s plan revealed critical issues with the roof — rapid structural degradation with parts of the roof in danger of imminent failure. Two of the six trusses are failing. In order to correct the issue without interruption to normal operations, the plan calls for replacing the roof from the inside out, trusses and all, in order to avoid failure.

“In order to do this, we have to go through the vaudeville theater tin ceiling,” Torrence said. “So that ceiling has to come down, it has to be stored because it is historic — the building is under historic covenant, so nothing can just be thrown in a dumpster. It has to be a very thoughtful, planned process from beginning to end.”

Fortunately, Arts of the Pamlico has already secured two grants to assist with the project. The first, from the famed Fox Theatre in Georgia, will grant $50,000 towards the replacement. A second, from a private family foundation, has granted $75,000 towards the project, with an additional $75,000 match promised if AOP can raise $75,000 from the community by the end of May. The organization hopes to begin work this summer, with completion in the fall.

“Bidding for the project is underway now,” Torrence said.

Donations toward the roof replacement will be deposited and tracked in a separate account with CresCom Bank, ensuring every penny donated to the roof goes to that cause. Donations of all sizes are welcome and appreciated, and may be sent by mail, at the theater, by phone, or at www.artsofthepamlico.org/raise-the-roof.

Located in the heart of downtown Washington, the Turnage Theatre serves as a place for local artists, musicians and performers to highlight their work, as well as an economic engine for the city and Beaufort County as a whole. The theater was renovated from a state of disrepair in the early 2000s, thanks to the contributions of countless donors and patrons of the arts. For Torrence, the replacement of the building’s roof is about protecting investments that have been made and preserving the arts for the future.

“There’s a long list of groups and people that have helped this building stay alive for future generations,” Torrence said. “We need to protect that, and we’re at a space and time now when we’re being challenged.”

It started simply enough: a fundraiser for the fire and EMS station, and a goal to sell 400 plates of... read more