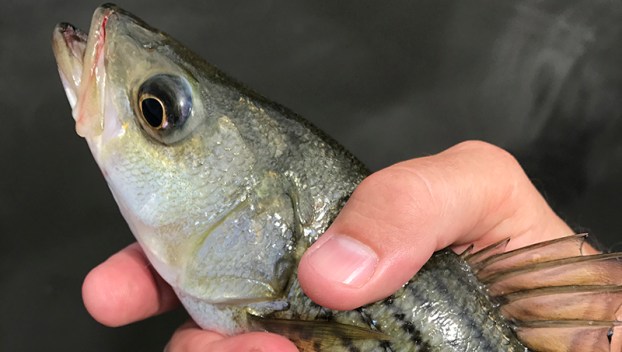 CATCH AND RELEASE: The North Carolina Department of Marine Fisheries has put a moratorium on catching and keeping striped bass in some coastal fishing waters managed by NCDMF, including Pamlico and Core sounds, and the Tar, Pamlico, Pungo, Bay, Neuse and White Oak rivers and their tributaries. (Ashley Vansant/Daily News)

Starting Monday, the season may be closing permanently on striped bass in some local waterways.

The North Carolina Department of Marine Fisheries announced last week it had adopted a plan to end both commercial and recreational fishing of striped bass in the waters managed by NCDMF, and announced Friday that the moratorium will begin Monday.

Striped bass season will remain open in joint fishing waters managed by both NCDMF and North Carolina Wildlife Resources Commission, according to a press release from NCDMF. A map delineating coastal and joint waters for these areas can be found at portal.ncdenr.org/web/mf/coastal-joint-inland-waters.

The moratorium is an attempt by NCDMF to protect the population of natural striped bass stock in local waterways —as opposed to hatchery-raised stock — with the goal of the natural stock spawning and surviving on their own. Since 1980, the Albemarle Sound, Tar-Pamlico River and Neuse River have been stocked with hatchery-raised juveniles. The fish made the leap to survive on their own in the Roanoke River, but in the Tar-Pamlico and Neuse, the program has been less successful. A bumper-crop of wild fish from 2014-15 led NCDMF biologists to propose a moratorium on catching and keeping striped bass, to protect for non-hatchery fish and larger females and increase natural spawning stock.

“I’ve got some people that come down here that really look forward to coming down here and catching rockfish, taking them home and freezing them to eat,” said Joe Solomon, a Hawkins Beach resident and avid fisherman. “A lot of people aren’t going to spend money to go fishing if you can’t keep some. Economically, I think it’s going to hurt the region and everywhere else. It’s certainly a big change since I retired.”

Others, such as David Daniel, a former NCDMF employee and member of the Striped Bass Fisheries Management Plan, believe a return to a natural stock won’t happen because rivers like the Tar-Pamlico and Neuse don’t have the flow rate necessary to keep striped bass eggs afloat, which is necessary to their survival. In an earlier interview, Daniel said more research need to be done and data collected before a moratorium is considered.

Others are certain a moratorium will not work unless all commercial nets are taken out of the rivers altogether.

“It’s really a kind of a half measure until we get rid of what’s killing the fish,” said Richard Andrews, owner of Tar-Pam Guide Service. “The recreational and commercial harvest are going away. The third element is flounder gillnets — you’re still going to allow gear in the water that will kill this fish. … In the summertime, if a striped bass gets caught in a flounder net in the summertime, he’s toast.”

Andrews said removing flounder gillnets from the river would increase striped bass’ chance for survival, but until it’s done, the conservation effort is incomplete.

Andrews said he and six guides from across the state recently met with John Nicholson, chief deputy secretary of North Carolina Department of Environmental Quality, to impress on DEQ the importance of removing flounder gillnets.

“We’ve got a moratorium. We’re not happy about it but we’re willing do it, but their shortsightedness would potentially not solve the problem,” Andrews said. “Commercially and recreationally, we cannot keep striped bass, but the flounder nets are going to be in the water this fall killing striped bass.”

The destruction of a home is devastating; the loss of personal belongings — memories, photos and more — can be... read more