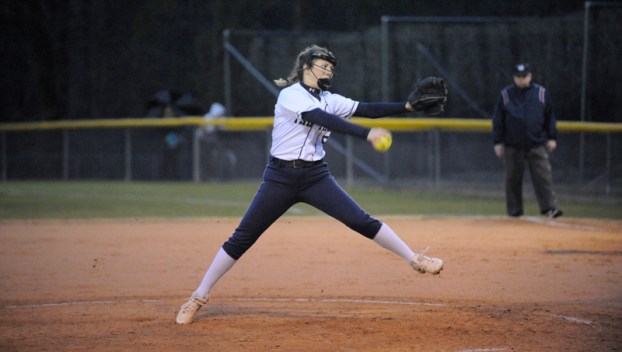 WASHINGTON — Playing in cold, dreary conditions Friday night, Washington and D.H. Conley provided plenty of fireworks, as the two powerhouse squads combined for 23 runs and 23 hits in a back-and-forth game that the Pam Pack emerged from victorious, 13-10, after twice battling back from a multiple-run deficit.

“This reminds me of an old slow-pitch softball game, somewhat, as much offense both teams had,” Washington head coach Doug Whitehead said. “Two quality teams, two quality pitchers and two quality lineups, it really was. I was tickled to death, especially the way we battled back. And they didn’t give up.”

The Pam Pack (2-0, 2A Eastern Carolina Conference) might’ve needed a little bit of time to get its bearings at the plate, not recording a hit until Sydney Keech, the seventh batter in Whitehead’s lineup, knocked a base hit into right field in the bottom of the second. But Washington’s offensive fortunes changed after that, finishing with 11 hits as all but one Pam Pack starter had at least one hit.

Summer Campbell, Desiree Maurizzio and Keech each led Washington with two hits each. But two of the biggest hits of the night came from Lily Wright, a two-run home run in the bottom of the third that gave the Pam Pack its first lead, and Emme Davis, a two-run blast in the fifth that cemented Washington’s lead at 13-10.

Conley (2-1, 1-0 3A ECC), on the other hand, needed no time to find its rhythm at the plate. The Vikings hit two doubles in the top of the first as they scored a run. With a runner on second and third, Conley could’ve scored more, but Pam Pack starting pitcher Abbi Tucker picked up a strikeout, one of her 10 in the game, to end the inning.

Washington tied the game in the second when a Wright groundout drove home Mary Emma Holscher after the sophomore drew a walk and then advanced to third thanks to a wild pitch and a Kaylee Elks sacrifice bunt.

The teams didn’t stay even for long, as the Vikings scored four runs in the top of the third. Washington didn’t help itself early in the inning, as a dropped fly ball helped load the bases and a wild pitch allowed a run to score. But things began to look really grim for the Pam Pack when Conley’s Maggie Craig, formerly of Southside, crushed a three-run home run to give the Vikings a 5-1 lead.

Whitehead said in between innings he asked his team to cut the deficit in half, but Washington did better than that, scoring five runs to take a 6-5 lead. Similar to Conley, the Pam Pack took advantage of some mistakes — including a couple of passed balls and a wild throw to first base — to advance runners and score the first three runs of the rally. But the final two were all Washington’s doing, as they came from Wright’s home run.

Unfazed, the Vikings strung together four hits in the fourth to score four more runs and take a 9-6 lead. S. Campbell drove home Laci Campbell with a base hit in the bottom of the fourth, but Conley tacked on a run in the fifth to reestablish its three-run lead at 10-7.

The bottom of the fifth was when the wheels began to come off for Conley’s pitching, which Washington took full advantage of. Elks led off with a standup double and two wild pitches brought her home, making the score 10-8. That marked the end of the night for Viking starting pitcher Lauren Wiles. Conley brought in Taylor Dunn, who gave up gave up three runs and three hits, including a S. Campbell RBI-single that tied the game and a Maurizzio RBI-double that gave Washington an 11-10 lead.

After recording just two outs, Dunn was relieved by Lexie Vincent. Davis, the first batter Vincent faced, welcomed the Viking into the game by blasting a two-run home run to give Washington a 13-10 lead.

Savanna Craft relieved Tucker in the top of the sixth, but she didn’t suffer the same fate as Dunn and Vincent. Craft gave up a double to Craig to lead off the sixth, but allowed no more base runners to close out the game.

“Abbi (Tucker) threw a lot of pitchers tonight. That’s why we had to go with Savanna (Craft) and Savanna came in and shut them down, and that was perfect and great,” Whitehead said. “She (Craft) faced the meat of their lineup and got through it in basically two innings and it was absolutely just great. But she can come in and gave them a different pitcher to look at, and she reacted well. She’s got a pretty good drop ball and it was working tonight. And that seemed to keep them off balance.”

The Pam Pack begins conference play tomorrow when it welcomes Greene Central to Washington at 6 p.m.