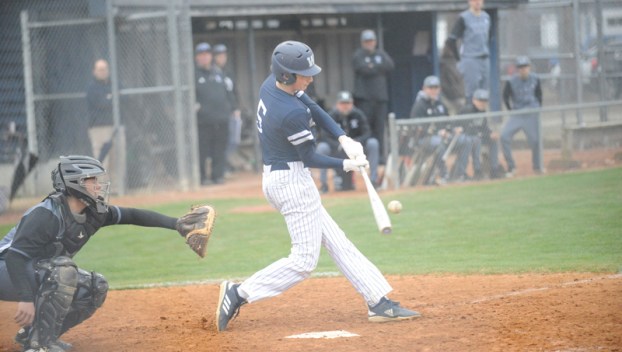 WASHINGTON — Playing each other for the second time in nine days, the visiting Northside Panthers provided Washington stiffer competition Friday night, compared to the 19-run victory the Pam Pack picked up in Pinetown the week before. But after finding itself falling behind, Washington finally kicked into gear and pulled away for a 10-3 win.

After Washington (4-1 2A Eastern Carolina Conference) defeated Northside (0-4 1A Coastal Plains Conference) 20-1 on the road Feb. 28, it’d be fair to assume the Pam Pack would have similar success against the Panthers at home. But instead, it was Northside that scored first to take a 2-0 lead in the top of the third. Washington head coach Kevin Leggett said his team’s mindset, combined with the fact it was the Pam Pack’s third game of the week, most likely played a part in the slow start.

“I think they came in a little laid back,” Leggett said. “We beat them pretty large last time; I think they thought it was going to happen again easy.”

But that was not to be the case. After a stalemate through the first two innings, the Panthers put together four hits in the third as they opened the game’s scoring. Cameron Craig led off with a base hit, before Dawson Boyd, who led Northside on the night with two hits, followed with another single. Matthew Adams drove home Craig, before a Washington error after Carter Boyd put the ball in play allowed D. Boyd to score.

A Caleb Alligood single loaded the bases, but Washington’s Mason Weaver, who made his first start on the mound at the varsity level, picked up two strikeouts to end the inning and limit the damage done.

The Pam Pack began to find its groove at the plate in the bottom of the third, scoring three runs to take the lead and ending Panther starting pitcher Craig’s day on the mound as well. Hayden Anderson, who reached first on an error and stole second, scored Washington’s first run on a passed ball. But the Pam Pack’s next two runs came from a Hunter Hall double and a Jeremiah Moore double, respectively.

Hall, who led all players on the game with three hits — all doubles — and three RBI’s, has been on a tear to open the season and leads the team with nine RBI’s. The senior is also tied for the highest batting average (.545) and most doubles (4) through the first five games.

“Hunter’s always had a good swing, good power. But I think it’s always been a mental thing,” Leggett said. “(He’s) Been stringing these few hits together these last few games, I think it’s really boosting his confidence and one’s just leading to another.”

Northside tied the game right back up in the fourth. Two walks and a D. Boyd single loaded the bases for the Panthers, which prompted Leggett to pull Weaver and insert Tyler Rowe on the mound. Weaver gave up three runs on four hits and struck out five batters in 3.1 innings, before moving to shortstop. Rowe then plunked Adams with a pitch to bring home a Northside run, making the score 3-3, but recorded two outs to end the threat.

Washington tacked on two runs in the fourth and another in the fifth, all of which could have been avoided, if not for Panther errors. A fielding error on a ball Logan Everette hit into the outfield with two outs in the bottom of the fourth allowed J.D. Swain to score and a Hall double brought home Everette the next at-bat. Then leading 5-3 in the fifth, Weaver scored on a Swain groundout after a wild pick-off throw allowed Weaver to advance to second during the prior at-bat.

Saving its best for last, the Pam Pack added four runs in the sixth. Hall hit his third RBI-double of the game, Christian Whitney brought home a run with a base hit and the Panthers walked home a couple of runs with the bases loaded to complete the scoring.

Northside head coach Keith Boyd said that while his young team still needs to learn how to close out games, he liked some of the improvements he saw from the first matchup with Washington, offensively and defensively.

“This group right here, they’re just a little bit different from the rest. You have some groups, who (when) things don’t go quite their way, they’ll sag their head and do things like that,” Boyd said. “But this group right here, they just playing the game and they’re going to come out and give you 100 (percent) every night. I like our fight. We’re fighting, we’re competing and after a while we’re going to find a way to put seven innings together.”