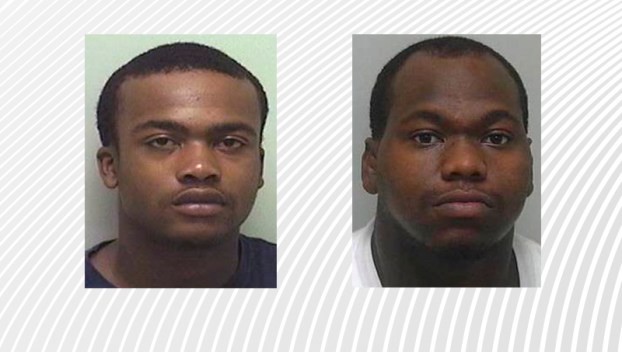 ON THE RUN: Saquan Ward, left, and Emanuel Woolard, right, both allegedly cut their ankle monitoring bracelets while a part of the Beaufort County Sheriff's Office Pre-trial Release Program. While Woolard was apprehended in Greenville on Monday, Ward is still on the run.

One apprehended, one on the run after cutting ankle bracelets

One suspect is in custody this week and another is still on the run after two Washington men cut off their pre-trial release ankle bracelets in unrelated attempts to elude justice. Both were part of the Beaufort County Sheriff’s Office Pre-trial Release Program, which has been utilized more in recent years to help alleviate issues with overcrowding in the Beaufort County Detention Center.

Saquan Erkle Ward, 22, is still at large almost a month after cutting his ankle bracelet. According to the BCSO, he cut his monitoring device on Feb. 15 and has been on the run ever since.

Ward is wanted on both Pitt and Beaufort counties on a number of charges, including interfering with an electronic monitoring device, manufacturing, two counts of selling or delivering a controlled substance within 1,000 feet of a school, possession of firearm by a felon, maintaining a vehicle or dwelling place for the sale of controlled substance and possession with intent to sell and deliver cocaine.

Emanuel Da-Jon Woolard, 26, was arrested Monday at a Greenville motel after five days on the run. According to the BCSO, Woolard cut his ankle bracelet on March 6, the same day he was scheduled to appear in Beaufort County Superior Court to face a host of assault charges.

According to the BCSO, Woolard faces sentencing as a habitual felon with pending charges of assault with a deadly weapon with intent to kill inflicting serious injury, felony assault by strangulation, misdemeanor simple assault, possession with intent to sell and deliver a controlled substance within 1,000 feet of a daycare, interference with an electronic monitor, resisting an officer and misdemeanor possession of marijuana.

In both cases, BCSO Lt. Jim Vanlandingham says warrants were issued for their arrests on the same day that their respective monitoring devices were cut. In instances where the devices are tampered with, monitoring officers immediately receive an alert.

“We don’t usually wait very long,” Vanlandingham said. “If we discover that has happened, we pretty much go ahead and charge them pretty quickly.”

In December, BCSO deputies arrested a Bath man, Kyle Modlin, who had eluded deputies for almost three weeks after slipping an ankle bracelet. Modlin, who was facing charges related to methamphetamine distribution, was also a part of the BCSO’s Pretrial Release Program. In his case, he had slipped the ankle monitor over his foot in a way that did not trigger an alarm.

When he was apprehended on Dec. 17, 2018, Modlin was found to be in possession of methamphetamine, scales, packaging materials, a 10 mm Colt pistol and a .22 caliber revolver.

Both Ward and Woolard have been the subject of releases by Beaufort County Crime Stoppers, a local program that offers cash rewards in exchange for anonymous tips concerning criminal activity. Anyone with information on Ward’s whereabouts is

“Z” is the magic letter, when it comes to the 3rd Congressional District election. In both the first primary, second... read more