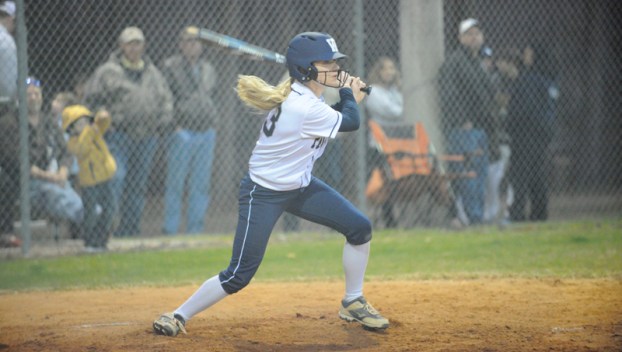 EFFECTIVE AT THE PLATE: The Pam Pack’s Mary Emma Holscher watches as a ball she hit makes its way to the outfield earlier this year. Holscher collected two hits and two RBIs yesterday in Washington’s win over Greene Central. (Sean Finnerty | Daily News)

The Pam Pack (3-0, 1-0 2A Eastern Carolina Conference) established its control of the game in the early goings, scoring a run in the second before tacking on four more runs in the third to take a 5-0 lead. Meanwhile, starting pitcher Abbi Tucker made sure Greene Central (2-1, 0-1 2A ECC) never got going at the plate, shutting out the Rams in her six innings of work. The junior limited Greene Central to four hits and struck out eight Rams.

Washington plated a sixth run in the bottom of the sixth, before Savanna Craft relieved Tucker at the top of the seventh. During her inning in the pitcher’s circle, Craft allowed no hits and picked up one strikeout.

The Pam Pack enjoyed a balanced effort at the plate, with eight of the 10 Pam Pack members who stepped up to bat recording a hit. Mary Emma Holscher led Washington offensively, going 2-for-3 with a pair of RBIs. Lily Wright and Tucker both also recorded two RBIs.

CHOCOWINITY — Southside treated its fans yesterday to a repeat performance of its season-opening, double-digit win against North Pitt, this time defeating the Panthers 11-1 in five innings at home.

The Seahawks were far from done though, as they scored two runs in third, four in the fourth and twice more in the fifth to reach a 10-run lead and end the game.

Southside recorded 14 hits, with Marah Gottwalt finishing 3-for-3 with a double and three RBIs. Alexis Whitehurst, Morgan Dixon, Talia Askew and Delaney Ayers all each had two hits, as Dixon, Askew and Ayers also had two RBIs each as well.

Whitehurst shut down North Pitt’s batters, allowing no hits and an unearned run, while striking out five Panthers.