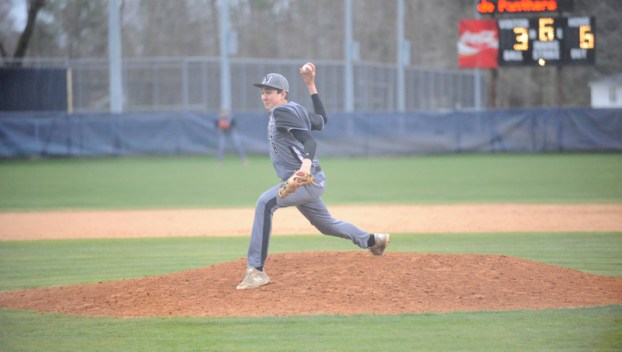 PANTHER ON THE MOUND: Northside's Carter Boyd lets fire with a pitch during a game earlier this season. Boyd saw time on the mound against Ayden-Grifton yesterday in the loss to the Chargers. (Sean Finnerty | Daily News)

CHOCOWINITY — Powered by an impressive day at the plate by freshman Bryan Gutierrez, and aided by several Mattamuskeet errors, Southside picked up its first win of the season yesterday, downing the Lakers, 14-0, at home in five innings.

Led by Gutierrez’ 3-for-3 performance at the plate, which included two doubles, a triple and six RBIs, Southside (1-2 1A Coastal Plains Conference) collected 10 hits and 10 RBIs as a team. The Seahawks scored steadily throughout the game, crossing home plate twice in the first, plating four runs in the second, scoring five times in the third and adding three more in the fourth.

Porter was also the only other Seahawk with multiple hits, finishing 2-for-3 at the plate with an RBI. Will Warren knocked in three runs, while Dylan Humbles and Matthew Bullock had an RBI each as well.

AYDEN — Playing Ayden-Grifton for the second time this season, Northside fell behind early and could never recover, falling to the Chargers, 12-2, on the road last night.

Northside (0-6, 0-1 1A Coastal Plains Conference) nearly came away with a win the last time it played Ayden-Grifton (4-4 2A Eastern Carolina Conference), losing in extra innings at home March 1. But that wouldn’t be the case in the rematch. The Chargers scored seven runs in the first and five more in the second to take a commanding 12-0 lead. The Panthers broke through in the fifth, scoring two runs, but it wasn’t enough to cut their deficit to less than 10 runs, bringing the game to an end.

Matthew Adams was responsible for Northside’s runs, recording two RBIs while hitting 2-for-2. Douglas Dixon also went 2-for-2 at the plate, while Carter Boyd and Tyler Modlin both finished with a hit as well.

Late splurge of runs propels Washington to victory WASHINGTON — All even with Greene Central through four innings yesterday, the... read more