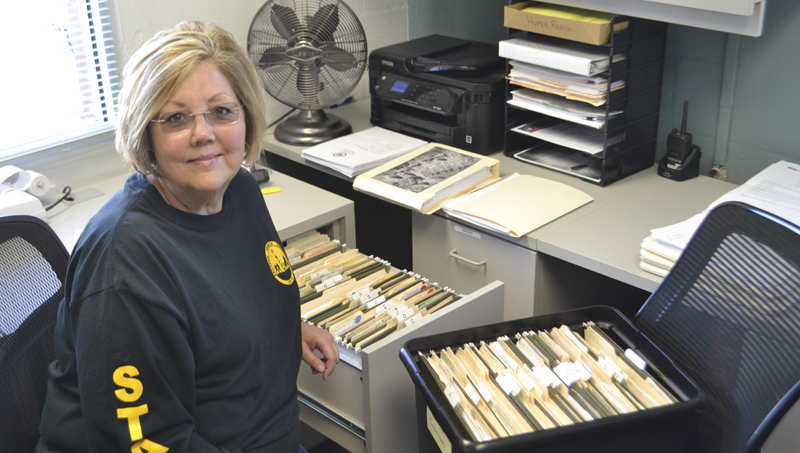 NERVE CENTER: For the past two months, Beaufort County Emergency Services has taken the lead on collecting and submitting flood mitigation applications for all corners of county. BCES Specialist Lisa Williams has been at the forefront of informing the public about the program, as well as collecting and processing applications. (Matt Debnam/Daily News)

It’s the largest hazard mitigation project Beaufort County has ever submitted to the state — applications representing 83 residential properties impacted by flooding during Hurricane Florence are now on their way to be reviewed at the state and federal level.

The hope, ultimately, is that the federal government and the state will fund flood mitigation projects for these properties, which may involve elevation, demolition or some other type of action to help prevent future flood damage. The funds to accomplish this task will come from a combination of federal Hazard Grant Mitigation Program funds, as well as money set aside by North Carolina for hazard mitigation.

“The people whose homes are being submitted are people who were identified through a series of public outreach meetings, past applications received by our office, damage assessments done by the county and municipalities, information from the national flood insurance program on claims that were filed after Florence,” Beaufort County Emergency Services Specialist Lisa Williams said. “We beat every bush we could think of.”

Collecting and processing these applications represents two months of work for the staff of Beaufort County Emergency Services. Meetings held in Aurora, Belhaven and Washington offered the public a chance to fill out applications and learn more about the program.

The only mitigation application larger than this one, submitted in response to Hurricane Florence, was a massive application to raise hundreds of residences in Belhaven.

With the applications filed with the state, now comes a wait for the homeowners that applied for mitigation — it may be as long as two years before any work occurs at the properties.

For the state and federal governments to review the applications and determine which projects are funded, it will take 12-18 months. In North Carolina, the state shoulders 25 percent of the project cost, while the federal government pays the remaining 75 percent.

“They’ll take what we’ve submitted and determine what properties put that money to its best use,” Williams said.

Properties then will be looked at on a case-by-case basis to determine how to best mitigate the flood risk. From there, it could be 6-12 more months before the project is complete, as the work on each project must be bid out publicly.

Even in cases where projects are not funded, Williams says having the pool of applications on hand and filed with the state will help develop a better overall picture of Beaufort County’s needs. In demonstrating that need, the door could be opened to additional funding.

“The county has put an enormous amount of effort into making sure that everybody who had an interest in participating had that opportunity,” Williams said. “This is not the end. If all of these properties that were submitted are not funded under this program, we have shown the state that there is a need in Beaufort County. If you missed this opportunity, contact our office, because we still want to know you are out there.”

While Emergency Services has acted as the nerve center for the application process, Williams said the work would not have been possible if not for the support of the Beaufort County Board of Commissioners and the municipalities who helped coordinate with local residents.

“It’s been a beautiful thing to see the way the county and the municipalities have worked together in getting this done,” Williams concluded.