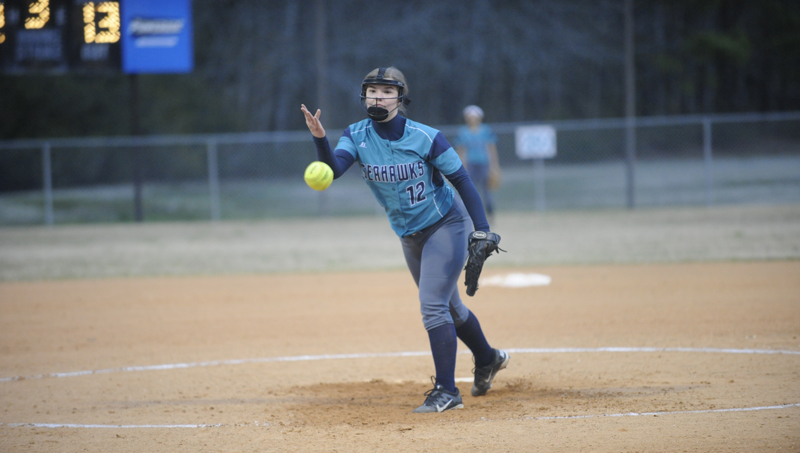 CHOCOWINITY — Southside continued its high-flying start to the season with a 21-4 win over visiting Washington County last night, pushing the undefeated Seahawks’ win streak to five games with all victories coming by at least 10 runs.

As has been the case so far this season, Southside (5-0, 1-0 1A Coastal Plains Conference) generated plenty of offense, recording 10 hits and 16 RBIs. Marah Gottwalt led the Seahawks with three hits, while knocking in two RBIs. Morgan Dixon’s four RBIs were a game-high, while Mallory Nobles chipped in with three and Laura Hodges, Shantel Cannon and Kendall Alligood each had two RBIs.

While the Seahawks came away with a big win, they weren’t mistake-free, committing five errors, which lead to Washington County’s (0-2 1A Albemarle Conference) runs on the day. In order to achieve the team goal of winning a conference championship, Southside head coach Kam Rouse said his team will need to iron out the mistakes.

“It was a big win. We made some mistakes, but that’s why I told them we got to clean that up,” Rouse said. “Got a conference game tomorrow; if we want to get a conference championship, we’ve got to clean up errors because the small things matter moving forward.”

The Panthers struck first, courtesy of a Southside error in the field. After Chernique Arnold led off with a single, a defensive error on a Janeja Perry groundball allowed both score, giving Washington County a 2-0 lead.

Southside had an immediate response, scoring six runs in the bottom of the first. The Seahawks also capitalized on errors, scoring two runs from a Panther mistake. A couple of hits with the bases loaded helped push Southside’s lead to 6-2 by the end of the inning.

Washington County managed to tack on a run in both the second and the third, but Southside continued to pile onto its lead, scoring seven runs in the second and eight more in the third. A combination of patience at the plate drawing walks and timely hits with runners in scoring position, including a two-run Dixon double, fueled the Seahawks’ offense.

Nobles picked up the win for Southside. In her three innings of work, the junior gave up four unearned runs on two hits. She struck out five Panthers, and walked one batter. Gottwalt relieved Noble in the fourth, giving up no hits and recording two strikeouts.

While Southside has gotten off to an impressive start this season, there are areas Rouse would like to see improvement in moving into conference play.

“Make the routine plays and realize that there’s going to be some tough plays that we’re not going to make, but the ones we should make, we’ve got to make them,” Rouse said.

Next up for Southside is home game against Jones Senior Friday at 6 p.m.