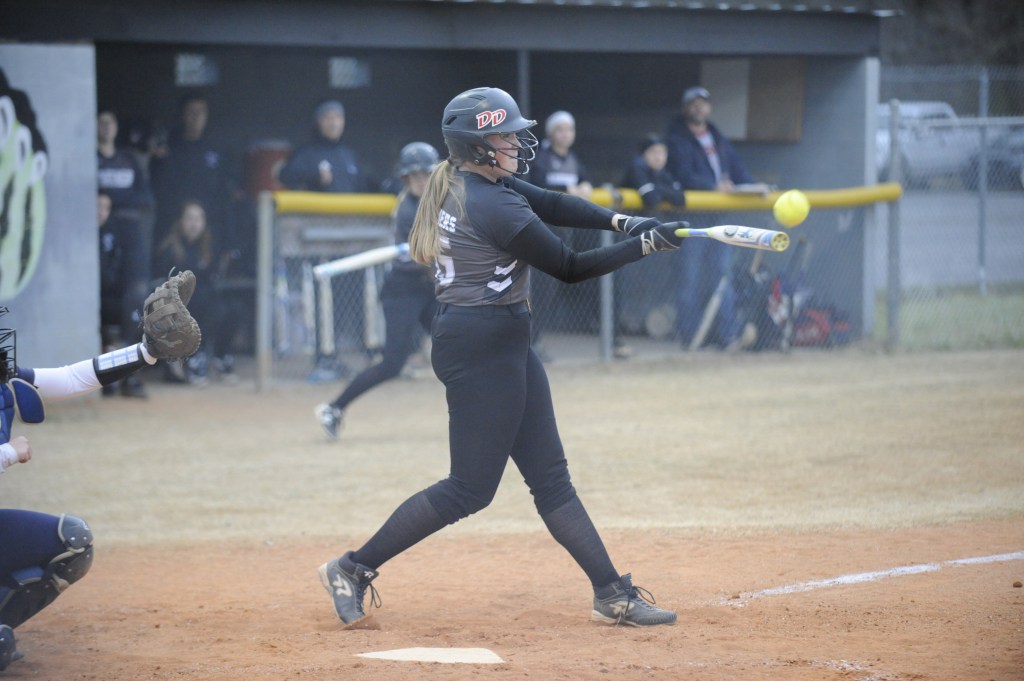 PINETOWN — The Northside softball team flexed its offensive muscle yesterday, smacking a pair of home runs in a 10-4 win at home over Bertie.

The Panthers (5-3, 2-0 1A Coastal Plains Conference) got going early, with Elyse Brinn belting a home run as the second batter in the bottom of the first. Northside’s second run of the game came soon after, with Cameron Rose bringing Kathleen Slade home after Slade hit a triple.

Finishing the game with 12 hits and eight RBIs, Northside scored every inning, building an 8-0 lead through four innings. Bertie (2-5 2A Northeastern Coastal Conference) got on the board in the fifth, plating four runs. Leading off the bottom of the fifth, Logan Jefferson answered the Falcons with a home run, giving Northside a 9-4 lead. The Panthers added an insurance run in the sixth.

Madison Braddy led Northside with two RBIs, while Jade Smith, Rylie Norman, Amelia Woolard, Rose, Brinn and Jefferson each had one. Nine of out Northside’s 10 batters recorded at least on hit, with Taylor Chase, Teagan Pilgreen and Slade all finishing with two apiece.

BAYBORO — After opening the season on a five-game winning streak, the Southside softball team finally met its match yesterday, falling on the road to Pamlico County, 19-4, in five innings.

After averaging 15.8 runs through the season’s first five games, the Seahawks (5-1, 1-1 1A Coastal Plains Conference) experienced an off-night at the plate, recording just six hits and three RBIs against Pamlico County (2-3, 2-1 1A CPC).

Putting up 15 hits and 16 RBIs, the Hurricanes scored eight runs in the second inning to take a commanding lead. Southside responded with two runs in the third, but Pamlico County scored five runs in the bottom of the inning, followed by sixth in the fourth to put the game out of reach. Southside scored twice more in the fifth, but it wasn’t enough.

Delaney Ayers and Alexis Whitehurst led Southside with two hits and an RBI each, while Morgan Dixon and Marah Gottwalt each chipped in with a hit and Talia Askew supplied the third RBI of the game for Southside.

AYDEN — Another conference game, another win for the Pam Pack softball team, as Washington defeated Ayden-Grifton 5-1 last night for its 17th-consecutive win in conference play.

Washington (5-0, 3-0 2A Eastern Carolina Conference) set the tone early, scoring three runs in the top of the first. Pam Pack starting pitcher Abbi Tucker then effectively shut down Ayden-Grifton (4-3, 1-1 2A ECC). The junior held the Chargers to six hits over seven innings, racking up 10 strikeouts, while surrendering an unearned run in the fourth inning. The Pam Pack added two insurance runs in the top of the sixth.

Summer Campbell led Washington with three hits, while younger sister Laci Campbell finished 2-for-3 with two RBIs. Desiree Maurizzio also had a pair of hits and an RBI, while Kaylee Elks and Lily Wright each chipped in with an RBI as well.

Not much went right on the night for Washington (6-2, 2-1 2A Eastern Carolina Conference), as the Pam Pack had only four hits and stranded runners with the bases loaded several times. Hunter Hall, J.D. Swain, Mason Weaver and Robert Pollock each had a hit, but that was it for Washington’s offensive production.

Ayden-Grifton scored two runs in the second and another in the third to establish an early lead. The Chargers blew the game wide open with a nine-run fourth inning, and the Pam Pack never recovered. Defensive errors were an issue for Washington, as Mason Weaver, Tyler Rowe and Jeremiah Moore combined to give up 12 runs, but only two were earned.

BAYBORO — After scoring to take the lead in the top of the seventh, the Southside baseball team lost in heart-breaking fashion yesterday evening, as Pamlico County scored twice in the bottom of the inning to hand the Seahawks a 5-4 walk-off loss.

Southside (3-3, 1-1 1A Coastal Plains Conference) struck first in the game, plating a pair of runs in the first inning. The Hurricanes (3-5, 3-0 1A CPC) had an answer, like much of the night, tying the game at 2-2 in the second. Southside scored to take the lead in the fourth, but Pamlico County tied the game again in the sixth.

Scoring to take a 4-3 lead in the seventh, the Seahawks looked to have sealed the win. But the Hurricanes played spoilers, scoring twice to get the conference win.

Christian Brinkley, Jordan Adams and Will Warren led Southside with two hits apiece. Warren and Brinkley supplied an RBI each as well.