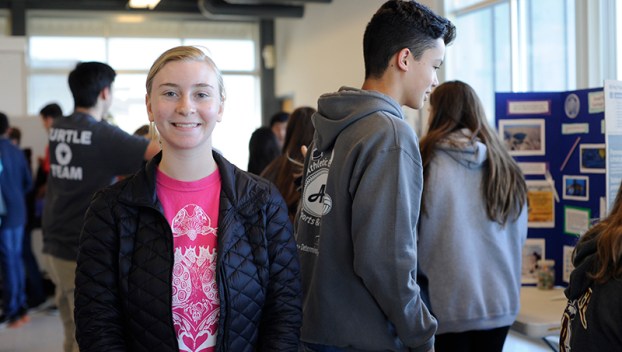 LEADERSHIP: Brittany Turner, from J.H. Rose High School, has a passion for marine life and educating her peers about the dangers posed to marine life by seismic airgun blasting used to find oil and gas deep beneath ocean floors. (Vail Stewart Rumley/Daily News)

They’re known as the Green Team, and their mission is to teach kids about the importance of conservation and environmental stewardship. But these educators aren’t biologists, oceanographers or ecologists, though they might be one day. They’re children teaching other children about the need to take care of local waterways and how to go about doing it.

The Green Team, made of members of the Pitt County nonprofit Love A Sea Turtle, or LAST, was on hand at the North Carolina Estuarium on Friday for World Water Day, an annual observance by the United Nations highlighting the importance of freshwater. Celebrating the occasion with them was the entire eighth-grade class of Bath Elementary School, who toured through four stops, starting with a demonstration of the water cycle by Estuarium volunteer Bonnie Kuras. Kuras said teaching people about the water cycle, and the role local waterways play in it, is her favorite thing to do.

“I think the importance is two-fold: having (the students) know where they are in their community and how important their home is in connection to the water we have near and what that water provides in the greater scheme, and the water cycle itself and our connection to the responsibility to that water and how it impacts the rest of the world,” Kuras said. 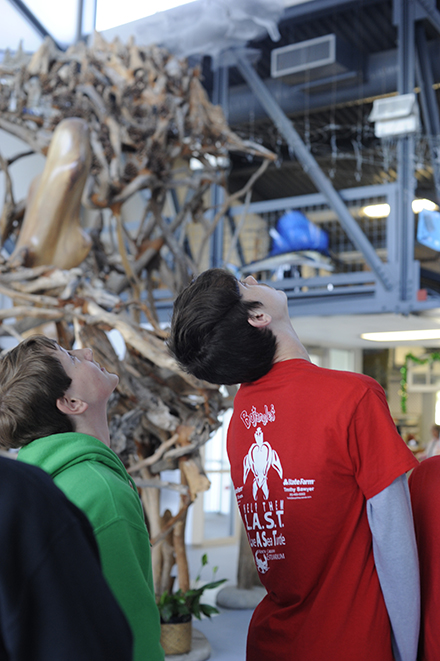 EVAPORATION: Students from Bath Elementary School look up to follow the “raindrop” as it travels through the water cycle sculpture at the North Carolina Estuarium. Bath’s entire eighth grade class visited the Estuarium for World Water Day in partnership with Love a Sea Turtle and sponsors Bojangles and State Farm. (Vail Stewart Rumley/Daily News)

Another stop took students a little closer to home: a visit with marine archeologist Kim Kenyon, conservator of the Queen Anne’s Revenge Conservation Lab, the East Carolina University lab responsible for the preservation of the many artifacts recovered from the pirate Blackbeard’s ship. Set up on the deck overlooking the Pamlico, Russ Chesson, the Estuarium’s programming specialist, took participants on a tour of the area’s biodiversity.

For these eighth-graders, it’s the information gained through peer-to-peer education that will most likely have a lasting impact, according to Love A Sea Turtle board member Dan Sokolovic.

“Every one of the youth here is a member of Love A Sea Turtle, and each has a passion they advocate for,” Sokolovic said.

The name of the Greenville-based nonprofit, Love a Sea Turtle, isn’t as all-encompassing as its service projects and activities. While the organization was founded on Sokolovic’s daughter Casey’s love of sea turtles, it quickly expanded to include many aspects of conservation, from a water-monitoring program in which Bath Elementary School students take part by testing water samples to community gardens, food distribution and nutrition education programs. All projects and programs are created and directed by their youth membership, Sokolovic said.

“I learned about it on a leadership trip to Washington, D.C., where we met with Oceana and Sen. Thom Tillis,” Turner said. “People really do not want this to happen. Currently, it’s not being used off our coast, but it’s definitely an issue that could come back up.” 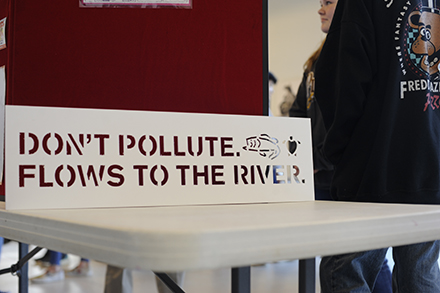 GREAT ADVICE: A Green Team project includes stormwater awareness and how what’s on the land can end up in the water through runoff. (Vail Stewart Rumley/Daily News)

Turner started her career with LAST four years ago, after she volunteered at the nonprofit’s summer camp for at-risk children. Now she’s a director of the organization and one of its two ambassadors to EarthEcho International, the environmental nonprofit founded in honor of ocean Philippe Cousteau, by his family.

Turner said the group has had great results in getting school children involved with water testing.

“We’ve had quite a few groups reach out and ask us to teach them so they can teach others how to test water in their own communities,” Turner said.

Even as a student, her role is to educate about conservation, which she believes is more readily received by a peer.

“It’s more relatable. They stay in school all day and hear adults telling them things, teaching lessons. It’s easy to zone out,” Turner said. “(This is) a lot more engaging and often captures their attention more.” 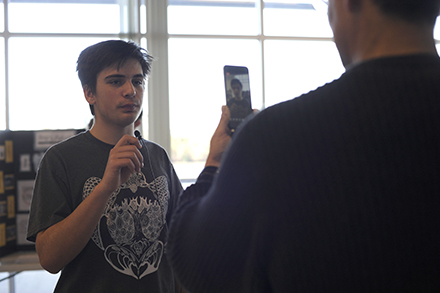 Braden McPhillips, ambassador to EarthEcho and a member of Love A Sea Turtle’s Green Team, checks in from the Estuarium on worldwide Facebook Live broadcast for World Water Day. (Vail Stewart Rumley/Daily News)

Some readers might remember the October 2017 homes feature about Apartments on Main 1, then a new Airbnb/VRBO rental on... read more