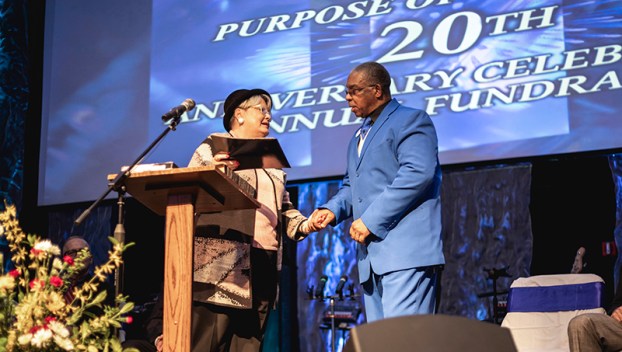 Since 1999, the Purpose of God Annex has helped Beaufort County residents both young and old find new opportunities and second chances. On Thursday, the organization and its community supporters from across the years gathered to break bread and celebrate a two-decade milestone anniversary.

During the course of the organization’s existence, POGA has helped thousands of people set their life on the right track — through after school and summer programs for children, employment and life skill training for adults and a host of other programs.

As to the impact of those programs, few are better equipped to speak of their impact than those who have seen their work firsthand.

Shakieya McKinney and Veronica Jones are two such people. Both have received job training at the annex, have had children who participate in POGA’s afterschool activities and have worked at the annex as office assistants.

For Jones, who is the daughter-in-law of Bishop and Mother Jones, her involvement with the Annex started when her son was referred to Purpose of God Annex by his principal at Chocowinity Primary School. As she began learning more about the center, she built a connection with the Joneses, and started volunteering in the office. Two weeks later, she was hired full time as an office assistant. In her son, Jones said she saw a huge change in his behavior and academic performance. 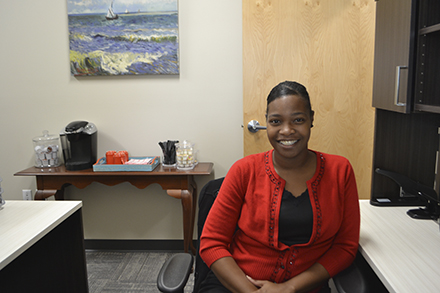 MAKING A CAREER: For Veronica Jones, who first worked with POGA to improve her son’s behavior in school, the skills she learned as an administrative assistant have translated to a career at IBX Legal Services. (Matt Debnam/Daily News)

“He went from having all D’s and F’s to having all A’s and B’s,” Jones said. “Right now, he’s still on the A/B Honor Roll. I’m very proud of my son. At the Purpose of God Annex, the teachers and mentors, including Bishop, sat him down and talked to him about how life is going to go if he didn’t straighten up in school. To have a lot of male figures like Bishop and Mr. Polk, I loved it, because he didn’t have any male role models in the house at the time.”

For herself, the skills that she gained at POGA have turned into a career. Jones is now a receptionist and office administrator at IBX Legal Services in Washington.

“I never thought in a million years this would be where I am,” Jones said. “I have four kids all together, and I thought I was going to be a single mother, struggling. After Bishop and Mother Jones, my life started to grow. It wasn’t just about the money — but me building as a person. Seeing me grow is making my kids grow.”

At the Annex, there’s a lot to keep track of with children and adults always coming and going, and that task falls largely to Shakieya McKinney. A veteran of the Air Force, McKinney had some difficulty finding employment after her time in the service. Looking for an opportunity to increase her employment skills, she decided to try Project New Hope.

“My husband graduated Project New Hope in 2010, and I decided I would try it,” McKinney said. 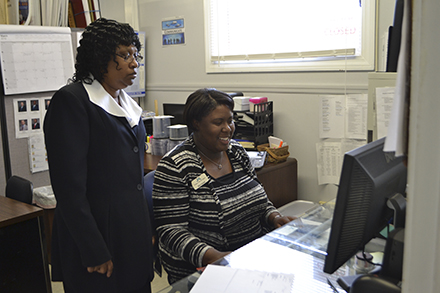 NEW SKILLS: POGA Office Assistant Shakieya McKinney, seen here with Mother Regina Jones, has seen the program impact countless lives in the decade she has been involved with Project New Hope, including her own. (Matt Debnam/Daily News)

For the nearly 10 years she has been involved with POGA since, McKinney has seen it make a difference in many lives. She speaks particularly highly of the Project New Hope program.

“So many people have been changed because of that program,” McKinney said. “I’ve seen people facing 80 years in prison and come off with three years of probation. It affects so many people, not just the people we serve, but the community.”

On the flip side, as a full time staff member at the annex, she also sees the positive influence of POGA on the children who come for after school and summer programs.  With three kids in the program herself, she can attest not only as a staff member, but as a parent.

“It’s amazing to see how much they respect Bishop and the staff here,” McKinney said.

While McKinney and Jones both share powerful stories of the Annex and its impact, theirs are only two of countless others. For more information on POGA and the programs the organization offers, call 252-974-1484.

They’re known as the Green Team, and their mission is to teach kids about the importance of conservation and environmental... read more