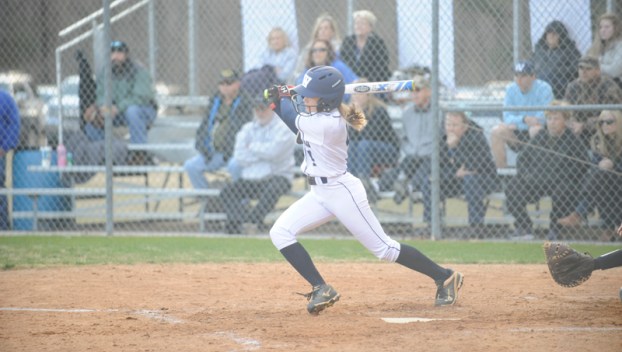 YOUNG SLUGGER: Washington freshman Laci Campbell follows through with her swing after knocking a single up the middle Friday against South Lenoir. (Sean Finnerty | Daily News)

WASHINGTON — The Pam Pack softball team had a slow night at the plate Friday night, but shutdown pitching ensured Washington came away with a 3-0 victory over visiting South Lenoir.

Washington (6-0, 4-0 2A Eastern Carolina Conference) mustered only seven hits and an RBI, courtesy of Kaylee Elks, against the Blue Devils (2-5, 1-2 2A ECC), taking advantage of some South Lenoir errors in the bottom of the first to score the game’s only three runs.

From that point on, starting pitcher Abbi Tucker and the Pam Pack defense took care of business. Tucker pitched a complete-game shutout, holding the Blue Devils to four hits while racking up 14 strikeouts.

Summer Campbell led Washington with two hits and a run scored, while Emme Davis, Laci Campbell, Sydney Keech, Mary Emma Holscher and Elks each recorded a hit. Holscher and Desiree Maurizzio both scored a run too.

CHOCOWINITY — After scoring multiple runs nearly every inning of Friday’s home game against Jones Senior, the Southside softball team went cold at the worst possible time — the bottom of the seventh — to fall to the Trojans, 14-13.

The Seahawks (5-2, 1-2 1A Coastal Plains Conference) and Jones Senior (4-5, 1-3 1A CPC) provided plenty of fireworks at the plate, as both squads racked up 14 hits. The Trojans opened the game by scoring four runs in the top of the first, but the Seahawks, who scored in every inning except the fourth and seventh, built a 7-4 lead through three innings.

Madison Easly and Shantel Cannon led Southside with three RBIs each, while Morgan Dixon’s three hits, which included a double and a triple, were a team-high. Marah Gottwalt and Alexis Whitehurst added a home run and a triple, respectively, for Southside, but it wasn’t enough to overcome the Trojans.

ROBERSONVILLE — The Northside softball team built an early double-digit lead and cruised to a 14-2 win in five innings over South Creek on the road Friday night, pushing the Panthers’ win streak to six games.

Kathleen Slade led the way for Northside at the plate, hitting a double and a triple with two RBIs and four runs scored. Cameron Rose, Amelia Woolard and Averi Marslender also had two RBIs, while Rose and Elyse Brinn both had a pair of hits.

Slade pitched all five innings, holding the Cougars to two runs, one of which was earned, on three hits. The sophomore struck out three Cougars.

The Panthers (2-7, 1-2 1A CPC) opened the game’s scoring, putting up five runs in the top of the second. The Cougars (1-6, 0-3 1A CPC) responded with three runs in the third, but Northside added six runs in the fifth and two more in the sixth to create a 10-run lead and end the game when South Creek couldn’t cut its deficit to single digits.

Finishing 2-for-3 with a triple and three RBIs, Ryan Cornelius led the Panthers at the plate. Cameron Craig and Tyler Harris both knocked in two runs as well, while Douglas Dixon and Harris were the other two Panthers with two hits on the night.

Matthew Adams picked up the win for Northside, pitching the first three innings, giving up three runs on four hits while striking out five Cougars. Cornelius pitched the final three innings, holding South Creek to one hit while racking up seven strikeouts.

CHOCOWINITY — Benefitting from some early offense, the Southside baseball team built a seven-run lead through the opening two innings Friday night and held on for an 8-4 win at home over Jones Senior.

The Seahawks (4-3, 2-1 1A CPC) started off hot at the plate, scoring five runs in the first off of five hits, before adding two more runs in the second. Southside had only two more hits for the rest of the game, but a pair of Trojan runs in the third and two more in the fifth weren’t enough to topple Southside’s lead. The Seahawks added another run in the sixth.

Hundley Stallings and Kevin White led the Seahawks with two RBIs each, as both Will Warren and Shawn Gerard knocked in a run as well. Bryan Gutierrez’s two hits were a team-high.

Warren pitched six innings as the starter, giving up four runs, three earned, on nine hits, while getting five strikeouts. Logan Langley picked up the save for Southside.

Beaufort County players standing out on the diamond

Beginning back on Feb. 27, the high school baseball season is now in full swing, having already provided a thrilling... read more