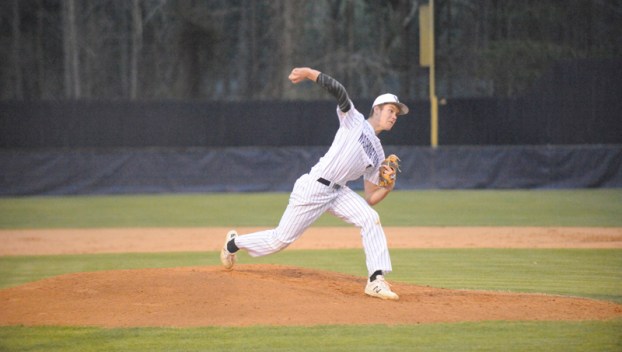 CAN’T TOUCH THIS: Washington’s Hunter Hall lets fire with a pitch during Friday’s win over South Lenoir. Hall held the Blue Devils to one hit while striking out 11 batters. (Sean Finnerty | Daily News)

WASHINGTON — Five errors from Washington nearly spoiled a night of quality pitching from the Pam Pack Friday night. But after South Lenoir tied the game up in the top of the seventh, Washington’s Jeremiah Moore came up with the game-winning hit with two outs and the bases loaded to give the Pam Pack a 5-4 walk-off victory.

“I’m glad we fought; it was good to see the fight in them,” Washington head coach Kevin Leggett said. “We really shouldn’t have been in that situation, but it’s always good to see the guys fight, that will to win there.”

Holding a 4-2 lead heading into the seventh inning and Logan Everette stepping onto the mound to relieve starter Hunter Hall, Washington (7-2, 3-1 2A Eastern Carolina Conference) looked to all set to close the game out. Two strikeouts and a walk later and the win seemed imminent. But a dropped fly ball on the next at-bat put runners on the corners and two passed balls during the following at-bat brought two South Lenoir (3-4, 1-3 2A ECC) runners home to score and tied the game at 4-4. Everette then picked up another strikeout to end the inning.

J.D. Swain led off the bottom of the seventh by drawing a walk, before a sacrifice bunt and groundout moved him to third. The Blue Devils then intentionally walked Everette and Hall, bringing up Moore with the bases loaded and two outs. Facing a full count, Moore rose to the occasion for his team and got enough on an inside pitch to hit a slow chopper and beat the throw to first, bringing Swain home to score the winning run and causing the rest of the Pam Pack to mob Moore at first.

After the game Leggett was thrilled with Moore’s ability to come up with a needed hit under pressure.

“It was great. He got behind early, but he worked back to a full count, which put the pressure on the pitcher. He hit a scorcher up the middle for a game-winning hit. That’s what it’s going down in the book as,” Leggett said with a laugh.

If not for some costly errors, which led to all of South Lenoir’s run production on the night, Washington wouldn’t have needed the exciting finish to win the game. Hall was nearly unhittable during his six innings of work on the mound. He held the Blue Devils to one hit, gave up two unearned runs — one in the fourth and one in the sixth — and issued 11 strikeouts. Everette also surrendered two unearned runs while giving up no hits, while striking out three of the five batters he faced.

The pitching of Hall and Everette is the strength of Leggett’s team, and their quality pitching is needed even more with how shaky Washington has been in the field so far this season.

“Right now, we need them both (Hall and Everette) pitching good,” Leggett said. “Pitchers are throwing great — I don’t think they had but one hit, maybe one or two hits. So the guys were throwing great. That helps us out a lot. You would hope it would take some pressure off of the defense, but right now it’s not. Hopefully, defense starts to step it up a little for them.”

Washington didn’t have a whole lot of success at the plate, recording six hits, while also taking advantage of some South Lenoir mistakes to score a pair of runs. Everette, who along with Moore led all hitters with two hits, hit a double in the first and was driven home by Hall to open the scoring.

A Washington error allowed South Lenoir to score in the top of the fourth, and the Pam Pack responded with three runs. The first came courtesy of a Mason Weaver RBI-single, while a passed ball and a wild pitch brought home two more runs for the Pam Pack. Two more Washington errors in the sixth allowed the Blue Devils to score, making it 4-2 and setting up the fateful seventh inning.

Washington next plays Wednesday when it hosts South Central at 7 p.m.