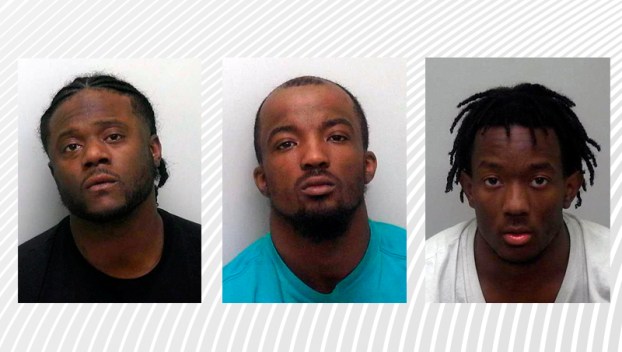 AURORA — A tip to the Beaufort County Sheriff’s Office led to three arrests and fewer drugs on the streets of Aurora last week.

In mid-March, the BCSO received a tip that occupants of a blue Dodge Charger were seen pointing guns at residents of the Aurora and Edward communities and were possibly involved in drug activities.

“One of our guys was in Aurora and was approached by a citizen who did not want to give his name,” BCSO Lt. Jim Vanlandingham said. “He gave the description of the car, but not any names of those who would be in it. He said the guys were riding around and had been seen pointing guns at people.”

That tip came to fruition Friday when BCSO Sgt. Nathan Drake stopped that same vehicle. Earlier in day, Cpl. Jim Mills had spotted the car at an apartment in Aurora and had run the vehicle’s plates, determining that it was uninsured. With that information in hand, Drake spotted the car on N.C. Highway 33 and conducted a traffic stop at about 2:30 p.m.

Noticing the odor of marijuana, Drake conducted a search of the car and its three occupants, discovering 70 grams of marijuana, about 1 gram of cocaine, a set of digital scales, plastic baggies, over $1,400 in cash and a loaded 9-mm handgun with the serial number filed off.

Based on the evidence and interviews of the suspects, the driver, Paquon Shabrien Coffey, 23, of Grimesland, was charged with possession of a firearm by a felon, possession a firearm with an altered serial number, possession of cocaine, possession with intent to manufacture, sell or deliver marijuana and maintaining a vehicle for the purpose of keeping or selling a controlled substance.

The passengers, Patrick Obrien Coffey Jr., 20, of Grimesland, and Akeim Raquon McCray, 23, of Smithfield, were charged with one count each of possession of a firearm with an altered serial number, possession with intent to manufacture, sell or deliver marijuana and possession of paraphernalia.

Vanlandingham said that it is unclear what kind of ties the three might have to the Aurora area.

4-H is gearing up for spring with its annual livestock show and sale, and a longstanding Tractor Supply-partnered fundraiser. The... read more