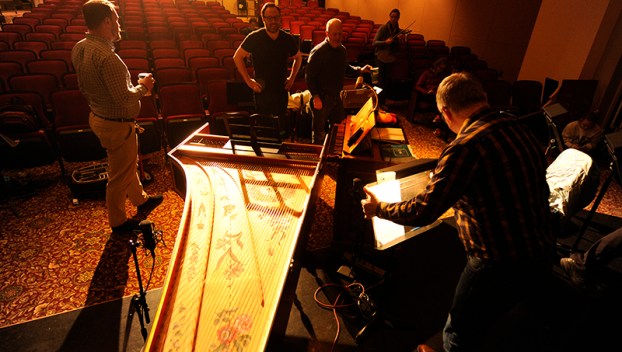 DRESS REHEARSAL: Professional musicians set up their reproduction 16th-century instruments for a dress rehearsal of “The Coronation of Poppea,” a production by East Carolina University Opera Theater. The updated opera will be performed at Arts of the Pamlico’s Turnage Theatre on Friday and Saturday. (Vail Stewart Rumley/Daily News)

Rome comes to the Turnage Theatre stage this weekend, along with East Carolina University’s Opera Theater.

For the second year, ECU School of Music’s Department of Opera will perform its spring opera at Arts of the Pamlico’s Turnage Theatre. “The Coronation of Poppea,” based in the year 65 A.D., tells the story of Roman Emperor Nero; his first wife, Octavia; and his soon-to-be second wife, Poppea; against a backdrop of instruments that would have been played when Claudio Monteverdi wrote the opera.

“This is an updated version of one of the earliest operas of Monteverdi, and the orchestra is playing reproduced instruments that would have been played during the 16th century,” said Jeffery Phipps, who has come out of retirement as ECU’s costume designer for the School of Theatre and Dance to outfit the singers. “The voices are beautiful and the music is lovely and when they’ve got these period instruments playing — I was backstage and the orchestra was practicing and it was just gorgeous. It was kind of magical to hear it in the back of the theater.”

“The Coronation of Poppea” was first performed in Venice in 1643. Though the opera is nearly 400 years old, director Daniel Shirley has given it a new look —more of a 1960s cocktail party, as opposed to the Rome of Nero’s time. This version also is not performed in the original Italian.

“The director has updated the look so it would be a little bit more timely today, and it’s in English,” Phipps said. “If you’re interested in operas; if you’re interested in beautiful period music; or in young people who are eventually going to become opera divas in the future, this is a great way to experience that.”

“The Coronation of Poppea” will be performed three times over the weekend: Friday night at 7 p.m.; Saturday at 2 p.m. and again at 7 p.m. Tickets paid for by cash/check are $20; $15 for faculty, staff and senior citizens; and $5 for students with ID. A $2 surcharge will be added for bank/credit card purchases.