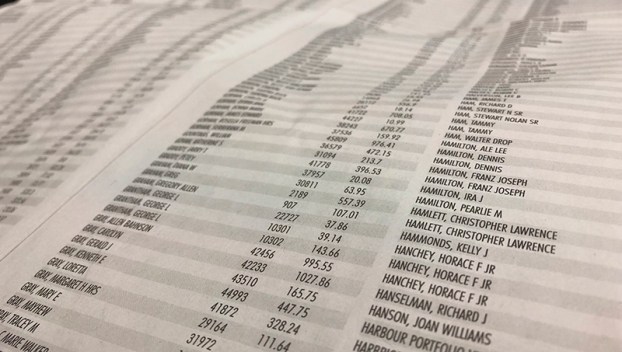 County Commissioner Stan Deatherage is on a payment plan with the county tax office to pay the $5,348.94 owed in outstanding taxes on four properties in Beaufort County.

In Wednesday’s issue of The Washington Daily News, Beaufort County Tax Collector Wyn Kinion printed the list of tax liens placed on real estate and personal property for non-payment of 2018 county taxes, part of the effort to collect ad valorem tax owed before the end of the fiscal year on June 30. The deadline for the 2018 taxes was Jan. 7.

“Last year was a tough year as I spent more time creating the very best internet platforms in this region, rather than selling the products we had created, thinking that some other funding sources would materialize, but did not in a timely manner,” Deatherage wrote in an email. “I have now; however, paid a majority of my property taxes, with interest and penalty, and am on a scheduled payment plan to pay the rest by June 30th.

Deatherage said he’s willing to talk about the issue with any constituent interested.
“As I travel around Beaufort County, and all points beyond our county lines, now selling our superior products, I will be more than happy to discuss all facets of the property tax (conundrum), in its entirety, providing any concerned individual has the time to listen to what I have to talk about as well,” Deatherage wrote. “But be warned, I am a busy man these days, and I will not tarry in an unproductive manner in any one place too long. I work for a living, I create superior products and jobs. This is what organic economic development looks like.”

Kinion said his office is at its busiest right now, as staff has hit the stage of collecting taxes through wage and bank account garnishments. As of Wednesday, 96.4 percent of taxes owed to the county had been collected, which equates to $31,268,626.99.

“Before we started doing garnishments this year, 93 percent had paid their taxes. The first year I was here, that was 80 percent,” Kinion said. “We also do payment plans. I’d rather do a payment plan than a legal action.”

Kinion said he tries to have all taxes collected by June 30, but there are some special cases.

“There are some exceptions that do carry out (beyond the deadline). You and I both know there are some who live on fixed income, and I really try to work with them,” he said.

Since Kinion took over as tax collector in October 2013, the collection rate has risen from 95.67 percent to the 97.92 percent collected last year. He said his goal was collect more than 98 percent this year.

“People don’t like getting garnished, and I understand that, but I gotta do what I gotta do,” Kinion said.

Rome comes to the Turnage Theatre stage this weekend, along with East Carolina University’s Opera Theater. For the second year,... read more