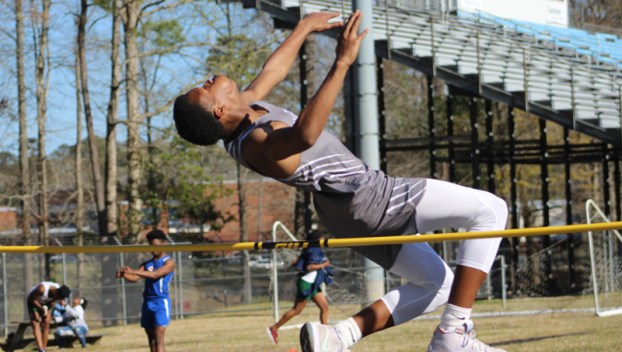 On the boys’ side, the Pam Pack scored 104 to win first place. Greene Central came in second with 53.5 points and West Craven finished third with 50 points. Kinston was missing a lot of athletes due to injury, resulting in a fourth place finish with 45.5 points. With the victories, both boys and girls squads for Washington stand at 6-0 after two quad meets this season, and the boys have 24 consecutive regular season victories, dating back to last year.

The Pam Pack dominated in the distance events with the girls taking 32 points in that area and the boys scoring 35. That was one of the biggest differences for head coach Perry Owens’ team. From top to bottom, the Pam Pack had a very impressive showing in this track meet.

“Our conference is loaded in every sport,” Owens said during the meet. “Every school is great in a certain way. Kinston is great in the sprints and Greene Central has some really good throwers. West Craven has improved a lot. We get to compete against the class of the 2A East every week. We haven’t seen some teams, but we know that we’re going to have a tough time because every team is good. It’s hard to repeat, so we just want to compete hard in every event.”

Washington’s victories were driven in part by individual performances that earned qualification to the East Regional later this season. Nkaya Ebron, whom Owens describes as the leader of the girls team and is a returning qualifier for regionals and state championships, qualified for regionals in the 100-meter dash with a winning time of 12.57 seconds. Kimaja Spencer — who is the state runner-up in the girls’ 400 last season and is expected to qualify again — won the long jump with a distance of 15-7, earning her a spot at regionals.

The Pam Pack’s girls 4×200 and 4×400 teams placed second (1:58.3) and first (4:30.0), respectively, earning a trip to regionals for Ebron, Spencer, Ashanti Booth and Kizoria Redmond. Brianna Woolard, an alternate on the 4×400 team, subbed in yesterday and ran as part of the first-place finish.

Among the boys, Michael Reid earned qualification to regionals. Reid blew away the competition in the 110 hurdles and 300 hurdles, placing first in both events and qualifying for regionals with times of 14.09 and 41.5, respectively.

There were many victories on both sides for the Pam Pack, but the biggest one may have come in the boy’s discus. Sherfield Smith set his personal record with a throw of 121-4 to win the event, which Owens believes should qualify Smith for regionals. The junior was extremely excited to win this event because he’s been working hard at his craft.

“It felt great,” he said after finding out he won. “I wasn’t able to throw like that last year, so this was awesome. All I need to do is work on my release point and I think I can be better. Qualifying for regionals is surreal because I didn’t think I was going to get there. I give all the glory to God for getting me to this point.”

Washington will be looking to make their mark throughout this season in the hopes of a run at sweeping the conference championships and Owens anticipates more of his athletes will earn a trip to the East Regional meet as the season goes on.

“I expect several more by the end of the regular season to qualify. I plan on taking another busload to regionals if we can stay healthy and continue to improve,” Owens said.