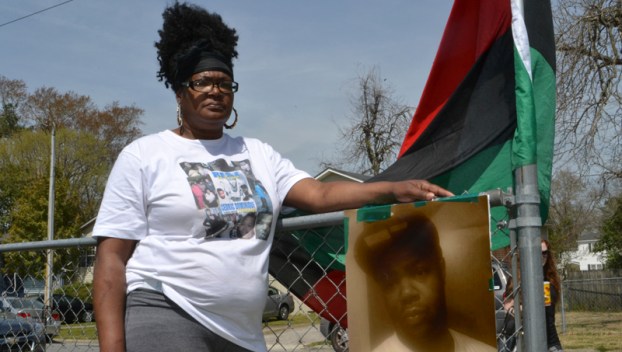 A MOTHER'S LOSS: Teresa Pritchard, Cedric Pritchard's mother, stands beside a photo of her son during a rally in his memory on Saturday.

Five months after Washington resident Cedric Pritchard was shot and killed by a Washington police officer during a traffic stop, the pain of his loss is still felt powerfully by his family and friends.

On Saturday, that pain was expressed publicly during a rally held at the Washington City Market that both honored Pritchard’s memory and demanded justice for his death.

His mother, Teresa Pritchard said that it hurts, “not to see my son no more, to see him come in the door and to hug him. I go places and think about him and I get emotional … I look for him to come home and I get a phone call and he’s no longer coming home.”

Earlier this week, District Attorney Seth Edwards announced in a press release that there would be no criminal charges filed against the officer who shot Pritchard. The decision came after a five-month State Bureau of Investigation review of the shooting.

In decision not to file charges, Edwards cited dash camera footage from the officer’s patrol car that allegedly shows Cedric Pritchard holding a revolver as he exited his vehicle during the stop. The release says that only three seconds elapsed from the time Cedric Pritchard opened his door to the time the officer fired two shots, hitting Pritchard in the back.

“I don’t agree with that,” said Teresa Pritchard. “We have more questions that we need answers to. Personally, we need the video so the public can see it. I don’t think everything went right.”

While the dash cam footage in question has been reviewed by Pritchard’s family, it has not been released to the public. Under a 2016 change to North Carolina state law, recordings made by law enforcement agencies are not considered public record, and require a court hearing and a judge’s order to be released to the public. Likewise, the results of the SBI investigation are not considered public record, according to representatives from the bureau.

For Cedric Pritchard’s family, however, Edward’s decision not to bring charges against the officer is not the end of the story. Teresa Pritchard confirmed that the family is speaking with attorneys on the possibility of filing a lawsuit against the WPD. 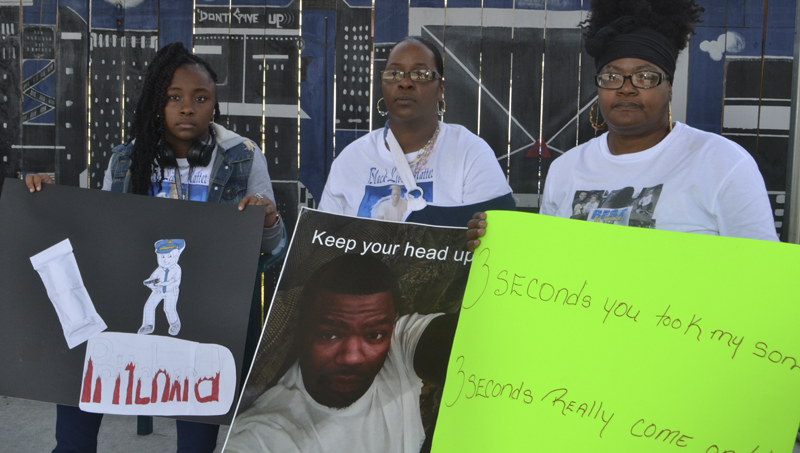 In addition to Pritchard’s family and friends, a number of local and regional organizations were represented during the rally, including the Beaufort County NAACP, the Greenville-based Coalition Against Racism and the Hyde County group Bible Reading African Community Effort.

“The young man was running — he was shot in the back,” BC NAACP Vice President James Smallwood said. “We have to recognize what the situation is and address it in a proper manner that can be appreciated by all parties concerned. I don’t know the policeman. The community doesn’t know the policeman. But if he did this in anger, which we don’t know, then he should not be on the police force. If he did this in anger, then he should be tried.”

Speaking on behalf of the Coalition to End Racism, an organization that advocates for transparency and accountability in policing, Dedan Waciuri went a step further, arguing that black communities throughout the country are continuously targeted and oppressed by police.

“We should live in a community where we do not have to tell our children how to interact with the police,” Waciuri said. “It’s not happening on the white side of town. They don’t tell their children that when the police get behind you that you’re supposed to be respectful, put both hands on the wheel and say ‘A, B, C and D.’”

While the organizations at the rally offered support for the Pritchard family and varying messages on justice being served in the case, at the heart of it all, those who loved Cedric Pritchard are still seeking justice and closure in his death.

“It wasn’t deserved,” said Latina Hopkins, Cedric Pritchard’s former girlfriend. “He was a good dude. Social media and everybody was talking bad about him, but if they really knew him, they wouldn’t be saying that because he really did have a heart. He didn’t deserve to die the way he did.”

Responding to the rally on Saturday, Washington Police and Fire Services Director Stacy Drakeford said he supported the family’s Constitutional right to voice their opinions in a peaceful manner.

As the Washington Police Department continues to investigate a fatal shooting during an attempted robbery at a local sweepstakes business,... read more