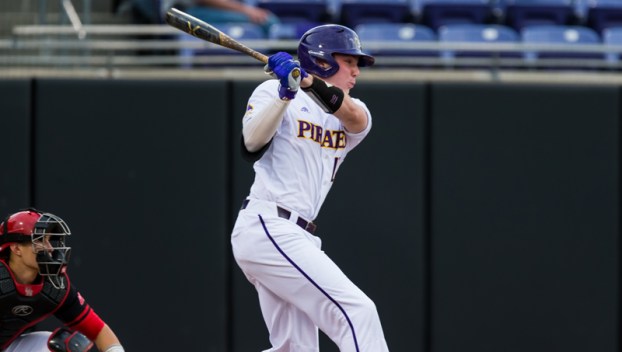 TAMPA, Fla. — Bryant Packard highlighted East Carolina’s series sweep of the University of South Florida this weekend, as he hit a grand slam in consecutive days to break each game open and keep the Pirates ahead for good. The Pirates’ series win is their first against the Bulls since 2005, and they’re currently on a nine-game win streak.

The bottom of ECU’s (21-6, 6-0 American Athletic Conference) batting order — Thomas Francisco, Brady Lloyd and Ryder Giles — loaded the bases in the bottom of the second today and proceeded to watch yesterday’s hero, Packard, step into the batter’s box. Surely not the person USF (12-14, 1-5 AAC) wanted to pitch to, but surely, it wouldn’t make the same mistake again.

Packard hit his second grand slam of the weekend on the first pitch he saw to give the Pirates an early 4-0 lead. Packard picked up at least one hit in each of the three games in the series, and had multiple hits yesterday and today, while leading ECU in RBI with four in both of the final two games of the series. His batting average is also third on the team (.333) and sits behind just Alec Burleson (.420) and Spencer Brickhouse (.392). Burleson added the other Pirate run in the series-sweeping game, as he hit a solo home run in the fifth to extend the lead to 5-0.

Jake Kuchmaner got the win for ECU in the 5-1 victory and improved to 3-0 on the season. He worked in tandem with Gavin Williams, as the duo gave up five hits across the game, racked up 14 strikeouts and allowed one earned run.

It took the Pirates a little while to get going yesterday, as they trailed 4-3 heading into the sixth inning en route to their 13-7 series clinching win. But the swings of the bat began going their way as they scored six runs off of three hits in the frame.

Brickhouse was the leadoff man and hit a single up the middle to become the first runner on. With Burleson grounding out in the next at-bat, Brickhouse moved to third base before a Turner Brown double to right field scored him to tie the game at four. Brown’s RBI-double quickly turned into a bases-loaded situation as Francisco was then hit by Bulls’ starting pitcher Alec Wisely. With runners on first and second, Jake Washer drew a walk to load the bases. With Giles up to the plate, Wisely again struggled, as he hit Giles on a full count to score Brown. Leading by one, Packard wasted no time in clearing the bases with a grand slam to right field, his first of the weekend, giving ECU a five-run advantage when it trailed by one entering the top half of the frame.

Wisely’s uncharacteristic frame earned him the loss and he didn’t come out again in the game, as his nine earned runs came as a career-high. USF instead turned to Logan Lyle for the remaining three innings, who was pegged for five more hits and four more runs.

Brickhouse took Lyle to the yard in ECU’s lone run in the seventh and Lloyd, Washer and Giles each drove home a run in the top of the ninth put the game away. The offense helped earn starting pitcher Tyler Smith his third win of the year in the series-clinching game.

In the opening game of the series on Friday, the Pirates blanked the Bulls behind starter Jake Agnos’ 11 strikeouts. In the 4-0 victory, Washer’s three-run home run in the top of the second inning that started the scoring proved to be the winning hit. Burleson also picked up another RBI when he scored Packard with a single in the top of the third inning.

The shutout win came with USF knocking on the door multiple times, however, as Agnos oddly picked up four strikeouts in the bottom of the first after putting two Bulls on base and USF loading the bases in the bottom of the eighth with two outs. The three Pirate pitchers — Agnos, Sam Lanier and Giles — gave up just four hits in the game, however, in its first of three strong performances on the weekend.

ECU will return home for a midweek in-state clash with Duke on Wednesday before heading on the road again to play Houston for its third AAC weekend series of the season.