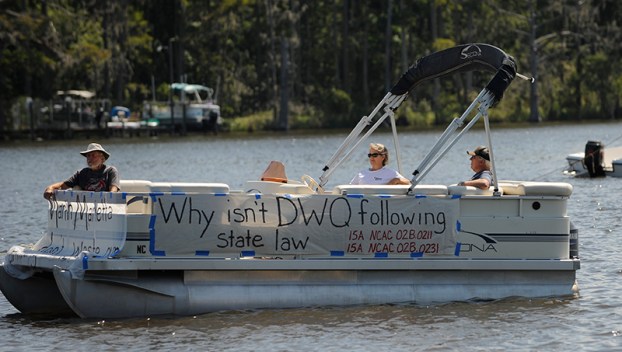 THE RALLY MAY BE BACK: Save Blounts Creek supporters showed their love of the creek during a 2013 boat rally. The rally may make a return this year, as discussions between a mining company and conservationists have broken down and the case may be headed back to court. (Vail Stewart Rumley/Daily News)

Blounts Creek case might be headed back to court

“This case is about the ordinary and the extraordinary.”

The words introduce a brief filed in the North Carolina Court of Appeals on March 18 by the Southern Environmental Law Center on behalf of Sound Rivers and North Carolina Coastal Federation.

The Blounts Creek case is likely headed back to court again.

“Essentially, negotiations broke down and briefs were filed and we’re kind of back to court at the moment,” said Sound Rivers Executive Director Heather Deck.

The court case started six years ago, after the state gave Martin Marietta Mining a permit to discharge into the headwaters of Blounts Creek, water used in the mining process for a proposed 649-acre limestone pit mine. Many argued the Division of Water Resources did not do its due diligence and ignored the objection of several other state agencies in issuing a permit allowing the mining company to discharge up to 12 million gallons of fresh water per day into the brackish creek — a creek also designated by the state as a nursery for saltwater species. Blounts Creek residents, business owners and river-lovers in general were concerned that  the practice would permanently alter the creek’s diversity of fish and abundance of high quality fish habitat.

The case seemed to have come to a close in the last days of 2017, when Superior Court Judge Joshua Willey Jr. not only recognized the grassroots organizations’ right to challenge a state permit but vacated Martin Marietta’s permit.

Since, the two sides had meetings scheduled to come up with other options to dispose of the wastewater, but were unable to find an agreement.

“It’s been about a year that we started to work on settlement,” Deck said. “All of us were hoping to reach an agreement, and it didn’t happen.”

In a brief filed  Feb. 13 by North Carolina Attorney General Joshua H. Stein, the state questions whether Willey erred in reversing the findings of then-Administrative Law Judge Philip Berger Jr. and exceeded the court’s authority in vacating the mining company’s permit, which was initially issued in July 2013. Berger twice ruled that Sound Rivers and NCCF had no standing to challenge the permit and that the state had done all it needed to do to justify the permit’s issuance. SELC’s brief states Willey’s ruling was the right one.

“The last set of briefs will be filed Thursday,” wrote SELC Senior Attorney Geoff Gisler in an email. “After that, we will learn whether the Court of Appeals will hear oral argument or not (they are not required to).”

Gisler said he could not comment on why the settlement discussion did not pan out.

“We’ll continue to move forward,” Deck said. “Our intentions remain the same: to find a long-term solution to protect the creek.”

A bill to allow public school systems to align their calendars with local community colleges passed by a wide margin... read more