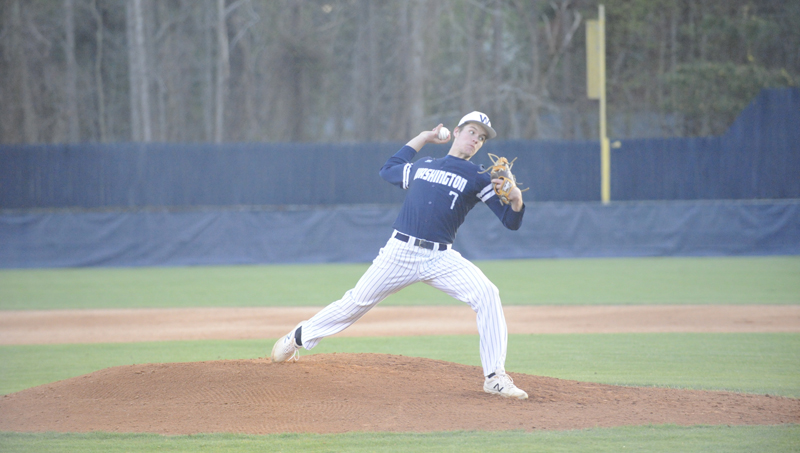 BRINGING THE HEAT: Washington’s Hunter Hall throws a pitch during last night’s win over West Craven. Hall, with the help of his defense, held the Eagles to a single run on three hits. (Sean Finnerty | Daily News)

WASHINGTON — Errors have been an issue at times for Washington this season, directly causing two of the Pam Pack’s three losses this year. But when Washington played West Craven at home last night in a matchup of two teams tied atop the conference standings, the Pam Pack defense held resolute and made the plays it needed to in the field, helping Washington come away with a 3-1 win over the Eagles.

With Washington (9-3, 5-1 2A Eastern Carolina Conference) struggling in the field going into the game, Pam Pack head coach Kevin Leggett decided to make some changes, inserting Zach Ambrose into right field, putting Jeremiah Moore in left field, moving Will Crisp to first base and playing Tyler Rowe at third with Hunter Hall starting on the mound. Whether it was due to the shakeup in the field or the recent focus on defense, the Pam Pack kept West Craven (7-5, 4-2 2A ECC) from producing multiple runs by making plays in the field that have gone awry in past games.

“We’ve been preaching defense, we’ve moved some guys completely around to do some things and it’s paying off a little bit,” Leggett said. “We played good defense tonight. Hunter (Hall) didn’t always get strikeouts tonight; he started getting better as the night went on with strikeouts. But we played defense when we had to tonight. We had some situations where they had runners on base. Not hitting as great as I’d like to be, but when you’re playing good defense and get good pitching, you don’t have to score as many runs is what I told them.”

With seven hits, Washington didn’t have the strongest of nights at the plate. The Pam Pack did much of its damage early, collecting five hits — including two doubles — through the first three innings when it built a 3-0 lead. Washington opened the scoring in the bottom of the second, which Hall led off by smacking a stand-up double. Hall almost scored after stealing third, but was thrown out at the plate after Moore hit into a fielder’s choice.

The Pam Pack didn’t have to wait long to score though. Robert Pollock followed by reaching first after an Eagle error trying to field his groundball, which also moved Moore to third. Hayden Anderson, serving as a courtesy runner for Pollock, promptly stole second. Crisp then drove Moore home with a base hit, before a wild pitch the following at-bat allowed Anderson to score. Hall drove home Washington’s third run with a sacrifice fly in the third, giving the Pam Pack a 3-0 lead.

Washington’s production at the plate dried up after that, as the Pam Pack had two hits the rest of the way. But the three runs proved to be enough, thanks to the play of the defense and Hall on the mound. The senior pitcher gave up just one run on three hits in 6.2 innings of work and struck out nine Eagles. Logan Everette was brought in to get the final out, forcing a fly out after walking the first batter he saw.

West Craven’s only run of the game came in the fourth, when it produced two of its three hits on the night. Eagle Jacob Wood led off with a double and was driven home by Hunter Evans two at-bats later. West Craven eventually loaded the bases, but Hall came up with a strikeout to end the inning.

The night began with Washington, West Craven and Ayden-Grifton all tied for first in the conference, making the victory over the Eagles especially crucial at the midway point of league play.

“That’s a good team right there,” Leggett said. “They (the Eagles) had just beaten Ayden-Grifton, so every win matters. Three-way logjam at the top is not the greatest thing. You definitely don’t want to be a game back because that’s hard to overcome in this conference with so many teams at the top. So I’m glad the guys showed up tonight.”

The Pam Pack returns to the diamond Friday when it travels to Greene Central for a game at 7 p.m.