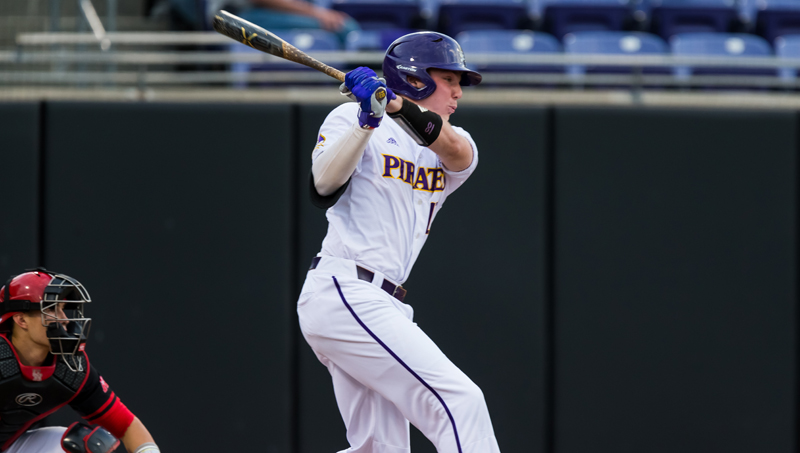 GREENVILLE — Brady Lloyd broke a scoreless tie after five innings last night when he hit his first extra-base hit of the season, a solo home run over the left field wall, helping East Carolina come away with a with a 6-1 victory over in-state rival Duke and extending the Pirates’ win streak to 10 games.

“I was just looking for a fast ball, and swung as hard as I could at it, and got it over the fence. Just barely, but we got it,” Lloyd said. “I don’t hit many home runs, so when I do, it’s awesome. I was hoping it was going, but I was dead sprinting around first base, but I looked out there and thought he caught it but then the fans started cheering.”

The Pirates (22-6, 6-0 American Athletic Conference), who haven’t lost since a 9-2 decision in early March against the Blue Devils (14-15, 3-9 Atlantic Coast Conference), added two more runs after Lloyd’s in the bottom of the fifth. One came after a Bryant Packard double that moved Jake Washer to third, as Washer then came home after a wild pitch from Duke starting pitcher Cooper Stinson. Packard then scored thanks to a Lane Hoover RBI-single the next at-bat to give ECU a 3-0 lead.

“Brady Lloyd with the big home run, it was a big plate effort and the defense was really good too. The team really settled into their positions,” Packard said.

The pitching duel began when Ryder Giles got his first career start for ECU and went three scoreless frames using 30 pitches. Giles also used just four pitches in the first inning to go three-up, three-down, and did it again in the third with just seven pitches. Not allowing a run, Giles kept his ERA at zero through nine appearances this season.

“Obviously we came in today knowing it was bullpen day, so for him (Giles) to give us three innings like that is huge and doesn’t put as much stress on the guys later on in the game,” Sam Lanier said.

Stinson was dealt the loss despite his strong start on the mound through four innings before falling victim to the ECU offense in the bottom of the fifth. He and Giles set the pace for each other and pitched a solid game for himself before the breakdown. Stinson finished with three earned runs on six hits in 4.2 innings on 90 pitches, with his pitch total being swayed after Lloyd and company got to him in the fifth.

“Offensively it took some time for us to get going, but that guy (Stinson), I don’t know why he’s not pitching on the weekend for them (Duke),” ECU head coach Cliff Godwin said.

But after Stinson’s passed balls broke him down even further, and the Blue Devils tipped into their bullpen, the Pirates took advantage and plated three more runs in the sixth.

The Pirates mirrored their fifth inning in the sixth when they put up three more runs and broke the game wide open. Francisco walked before Lloyd outran a beautifully placed left-line bunt to be safe at first before Washer’s RBI-single scored Francisco. Barber stepped up to the plate and got a groundout RBI to score Lloyd and Packard joined the party with an RBI-single of his own to reward Washer and extend the Pirates’ lead to 6-0.

“I thought our guys played great. It started on the mound with Ryder, got out of a jam in the second inning, then Trey Benton came in, Sam got us out of a jam, (Zach) Barnes was great, Sam (Lanier) was great and even Evan Odum was good. He was a diving catch away from not giving up a run,” Godwin said.

It wasn’t until two outs in the top of the ninth that Duke plated a run, when Kennie Taylor broke the shutout with a RBI-single to score Michael Rothenberg. Had the shutout stood, it would have been ECU’s fourth in its last ten games, dating back to a 9-0 win at Maryland on March 15.

The Pirates will be away from their home fans, who showed out for a season-best 4,744 yesterday, as they travel for a three-game weekend series with Houston for the third weekend of AAC play.

“I think this team likes playing on the road, it’s not a big difference to us, we’re a pretty tough team so we’ll be fine,” Packard said.