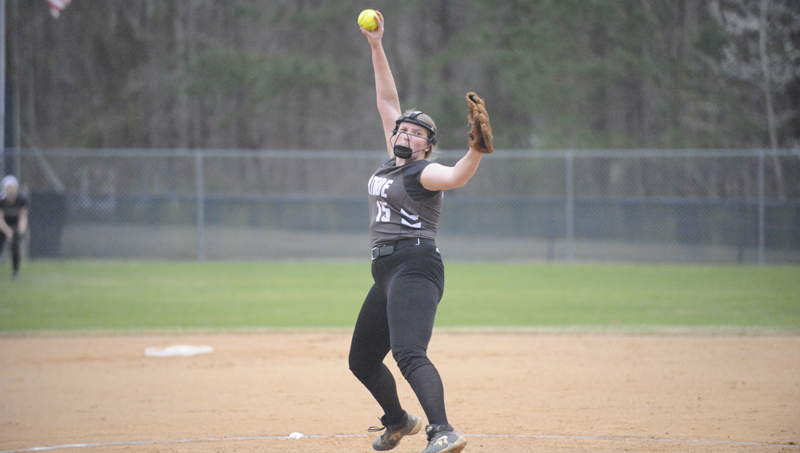 BACK AND IN FINE FORM: Northside pitcher Madison Braddy goes through her windup during this year’s season opener. Braddy returned from injury for yesterday’s win over Jones Senior, holding the Trojans to no hits in four innings of work. (Sean Finnerty | Daily News)

PINETOWN — The Northside softball team continued its commanding start to conference play with a 16-0 victory in five innings at home over Jones Senior yesterday, cementing the Panthers’ No. 1 spot in the conference standings at the midway point of league play.

Northside (9-4, 6-0 1A Coastal Plains Conference) dominated the Trojans (6-7, 2-4 1A CPC) in just about every way. Pitchers Madison Braddy — who made her return from injury to start against Jones Senior— and Kathleen Slade combined to throw a no-hitter. Braddy threw five strikeouts in four innings of work, while Slade struck out three Trojans in an inning of relief.

The Panthers’ bats were also hot, as Northside collected 14 hits — six for extra bases — and knocked in 12 runs as a team. The Panthers produced nine runs in the bottom of the first to essentially put the game out of reach, before adding a run in the second, two more in the third and four runs in the fifth.

Teagan Pilgreen and Slade each led Northside with three hits apiece, as Slade smacked a double and Pilgreen belted a triple. Taylor Chase, who also hit a triple, had a game-high four RBIs, while Rylie Norman drove home three runs and Jade Smith knocked in two.

Northside begins the second half of conference play tomorrow when it travels to play Pamlico County at 6 p.m.

PINETOWN — It was a disappointing night for the Northside baseball team yesterday evening, as the Panthers’ struggles at the plate and in the field contributed to a 12-3 loss at the hands of Jones Senior at home.

It was a rough outing at the plate for Northside (3-10, 2-4 1A Coastal Plains Conference). The Panthers managed just three hits, with Douglas Dixon providing two of them himself — including a double — as well as an RBI. Tyler Modlin had Northside’s other hit in the game. Ryan Cornelius also chipped in with an RBI, coming off of a sacrifice fly.

The Panthers’ troubles didn’t end at the plate. They also committed six errors, accounting for six unearned runs for Jones Senior (9-5, 2-4 1A CPC). The Trojans built an eight-run lead, scoring two runs in the top of the first, plating two more in the third and adding four runs in the fourth. Northside responded with two runs in the bottom of the fourth and scored another in the fifth to cut into Jones Senior’s lead. But the Trojans scored four more runs in the sixth to put the game well out of reach.

Northside pitcher Matthew Adams gave up eight runs, five of which were earned, on nine hits in four innings, while getting one strikeout. Carter Boyd surrendered four runs, one of which was earned, on a hit and struck out a Trojan in an inning of relief. Ryan Cornelius also saw an inning of action on the mound, collecting two strikeouts, while allowing no hits or runs.

The Panthers return to action tomorrow when they travel to Pamlico County to take on the Hurricanes at 6:30 p.m.