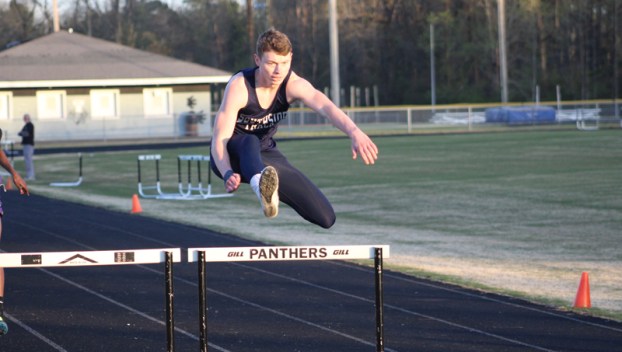 AIRBORNE: Southside’s Richard Shavender clears a hurdle while running the 110 hurdles during yesterday’s meet at Northside. Shavender won both the 110 hurdles and 300 hurdles, setting a new personal record in the latter. (Laieke Abebe)

Southside outpaces the competition at meet hosted by Northside

PINETOWN — Northside hosted a four-team Coastal Plains 1A track meet yesterday afternoon. Fellow conference members Tarboro and South Creek were in attendance, but it was an old rival who dominated the day. Southside’s girls and boys track teams both picked up big victories in this meet.

For the girls, the Seahawks scored 112 points to comfortably take first place. The Panthers finished second with 64 points, followed by South Creek with 52 and Tarboro with 17. Southside had a lot of individual winners on the girls’ side, but the boys also competed extremely well.

The Seahawks scored 128 points as a team to take first place among the boys. Tarboro came in second with 62 points and South Creek finished third with 46. Northside finished in fourth place with 17 points.

“We’re trying to keep the team together,” Girani said. “We possess a lot of heart and I think that can take us far. All we have to do is give an effort in practice and in every meet we have for the rest of the season. I won’t ask anything of my team as long as they give it their all.”

“I just want to help my team gain more confidence as the season goes on,” Wood said after completing the 4×200 relay. “Coach Q (Andrea Quinerly) gives us a lot of confidence and we have a lot of experience on our team. We also have some underclassmen that have improved throughout the season. Repeating isn’t easy, so it’s about leadership, dedication and practice. I think we can do it again if we give it our all, and improvement will play into how well we do going forward.”

Overall, it was a successful day for Southside head coach Andrea Quinerly and his Seahawks.

“Leadership,” Quinerly said of his team’s biggest strength. “Our veterans are working the younger kids to be better everyday. They’re leading vocally and by example. We compete within ourselves in practice and in meets. I think that’s what makes us a really good team. I’d like to see us have some more endurance going forward because I don’t know if we’re in the best shape right now. We had a large number of athletes at regionals and states last year. We can get 10-15 in the boys and girls postseason track meets similar to what we did last season.”

Northside will host another conference meet next Wednesday at 4 p.m., which will include Southside among the field of competitors. In addition to the Seahawks, Riverside will make the trip from Williamston to take part.

Panthers conquer the Trojans PINETOWN — The Northside softball team continued its commanding start to conference play with a 16-0... read more