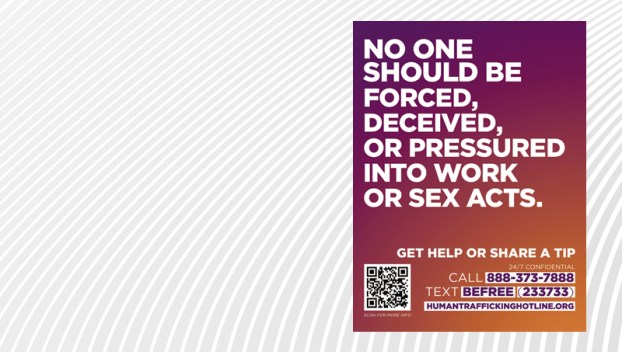 SPREADING AWARENESS: Posters like these, distributed by the North Carolina Human Trafficking Commission at businesses throughout the state, are a means of increasing public awareness of human trafficking. (NC Department of Justice)

Men, women, children — according to statistics from the National Human Trafficking Hotline, more than 4,500 people were identified as human trafficking victims in North Carolina between 2007 and June 2018.

These are people being held in slavery. Through force, fraud and coercion they are made to work or perform sexual acts against their will, while someone else profits. Here in Beaufort County, local organizations are working to prevent human trafficking and respond to it when it occurs.

Under a 2015 North Carolina state law, school systems are required to provide education to address sex trafficking prevention and awareness. In Beaufort County, Beaufort County Schools 6-12 Curriculum Director Ashley Padgett says that education is happening and a specialized training this summer will help teachers better address the issue with students.

Partnering with the schools and other local agencies, local nonprofit Daughters of Worth focuses its mission on empowering girls of all ages. Part of that mission, according to nonprofit founder Liz Liles, is educating girls and young women about dating violence, Internet safety and human trafficking.

“Daughters of Worth was founded as a direct response to human trafficking,” Liles said. “Throughout the last couple of years of hearing stories from girls in our community, I realized that there’s not a lot of work being done to share with them the resources available, how to prevent trafficking and who to connect with when things are happening and to use their voice.”

Today, the organization serves 1,000 girls per month throughout eastern North Carolina, including in-school programs in Beaufort County. While the educational element is a start, Liles says it will take a comprehensive community effort to fully address human trafficking.

“A lot of it begins with that awareness piece,” Liles said. “It’s a community issue, so it’s going to take professionals from every single sector to be able to not only identify, but to know how to serve (victims) properly … I think a lot of people are not aware it’s happening here in our community.”

At the local level, one partnership currently in the works is a joint effort between Ruth’s House Domestic Violence Shelter and The Salvation Army of Washington. Statewide, The Salvation Army’s Project FIGHT (Freeing Individuals Trapped by Human Trafficking) works to provide case management for survivors of human trafficking.

“We provide comprehensive case management services from rescue to restoration for all victims of human trafficking,” said NC Project FIGHT Coordinator Elizabeth Hunter. “That includes minors, adults, males, females, transgender, labor and sex trafficking, foreign-born and domestic clients, so we serve all populations. We provide any array of services from the moment they are identified to helping them get back on their feet and be able to sustain themselves independently.”

At Ruth’s House, which works with survivors of domestic violence, a new effort is underway to provide services for survivors of human trafficking. With the partnership underway with The Salvation Army, the nonprofit is looking for other community partners to help address the issue.

“We have done some training and are working to partner with The Salvation Army Project FIGHT to get some better case management and services for human trafficking survivors when we encounter this in Beaufort County,” said Jessica Yoder, Ruth’s House interim client services coordinator. “Ruth’s House would be the sheltering aspect of the human trafficking solution in Beaufort County.”

While incidents of reported human trafficking are on the rise statewide, few cases have come to light in Beaufort County or the 2nd Judicial District, according to District Attorney Seth Edwards.

“I have seen very few of these cases, but I do know certain areas of NC have experienced some high profile cases,” Edwards wrote in an email.

At the Beaufort County Sheriff’s Office, Criminal Investigations Lt. Jim Vanlandingham says prosecution is pending in one case where minors were involved in commercial sex acts. Vanlandingham said that, to his knowledge, deputies at the BCSO have never dealt with a human trafficking case and have not received any specialized training on human trafficking.

“Does it go on?” Vanlandingham said. “I’m pretty sure it does, but there has not been a lot of attention brought to it here in Beaufort County.”

If you suspect that human trafficking is occurring, call the National Human Trafficking Hotline at 1-888-737-7888.