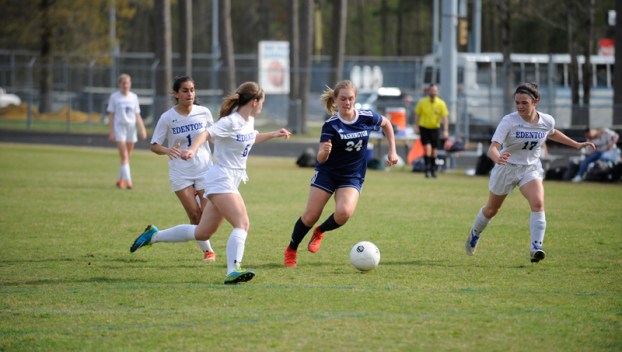 CAN’T BE CONTAINED: Washington attacking midfielder Lilly Frances Lobos takes on a trio of Edenton defenders during the Pam Pack’s 4-2 win yesterday afternoon. Lobos proved too much to handle for the Aces, as the sophomore repeatedly dribbled past multiple defenders and scored two goals. (Sean Finnerty | Daily News)

WASHINGTON — Despite peppering Edenton’s goal with shot after shot, Washington found itself tied at a goal apiece with the Aces at halftime yesterday. But the Pam Pack kept at it and sharpened its finishing in the second half, going on to win, 4-2, at home for its fourth consecutive victory.

Washington head coach Ed Rodriguez, who described his team’s play on the day as “sloppy,” was nevertheless pleased with the Pam Pack’s ability to still get a positive result.

“It just didn’t flow today; it’s one of those days,” Rodriguez said. “Touches were off and we just couldn’t get anything (going). It’s nice to win, even though things weren’t perfect.”

Washington (8-3, 4-0 2A Eastern Carolina Conference) essentially dominated Edenton (7-4, 4-1 1A Albemarle Conference) for much of the opening half, repeatedly winning the ball back from the Aces and keeping them pinned in their own half of the field. Lilly Frances Lobos was a force for the Pam Pack, often beating multiple defenders to get a look at goal.

Washington bombarded Edenton’s goal, racking up 14 shots — from Lobos, Alyssa Villegas, Rebecca Zerniak and Claire Shepherd — in the first half. Despite this, the Pam Pack’s first goal came from an Aces’ own goal. With 23 minutes left before halftime, Lobos once again dribbled down the left flank before getting to the endline and playing a ball across the face of goal, where an unlucky Edenton defender knocked the ball into her own net.

Washington looked all set to take full control of the match, but its defense went to sleep just three minutes later, allowing Amy Turner to receive a throw-in in her half of the field before she raced down the right flank, unbothered by a Pam Pack defender, before cutting in and finishing far post with a low shot. Washington continued to fire away at the Aces’ goal but went into halftime with a 1-1 tie, despite outshooting Edenton, 14-1.

But Washington resumed play after the break and scored three goals to pull away, which Rodriguez credited to better shot-selection against a quality goalkeeper in Edenton’s Anna Bass.

“She’s (Bass) a great goalie for that team. She’s, I think, the best goalie we’ve faced all year. She comes out, she’s tall, she’s strong on the ball and you’ve just got to beat her on the corners. You cannot beat her on her making a mistake.”

Even though Washington didn’t dominate possession as much or enjoy as large of a shot disparity in the second half, it was a precisely placed shot in the corner of the goal with 25 minutes remaining that gave the Pam Pack a lead it wouldn’t relinquish.

Villegas received the ball just outside the right corner of Edenton’s penalty box after a poor Aces’ clearance and unleashed a curling, right-footed shot that flew past the outstretched arms of Bass and into the near-post corner.

10 minutes later Lobos beat an Edenton defender to a loose ball at midfield and dribbled her way into the penalty area before cutting inside to her right foot and slotting the ball past Bass for a goal. The Aces scored just a minute later to makes things tense for Washington, as Turner once again rampaged down the right flank and crossed to Lilly Bunch, who nudged the ball home to make the score 3-2 with 14 minutes left in the game.

But Lobos put the final result out of doubt with five minutes left. The sophomore, who now leads the conference with 38 goals and 11 assists, received the ball at the top of the 18 before zigzagging her way past two defenders in the penalty box and firing a left-footed shot past Bass for a goal.

Washington returns to the field tomorrow as it will host North Lenoir at 6 p.m. and also celebrate Senior Night.