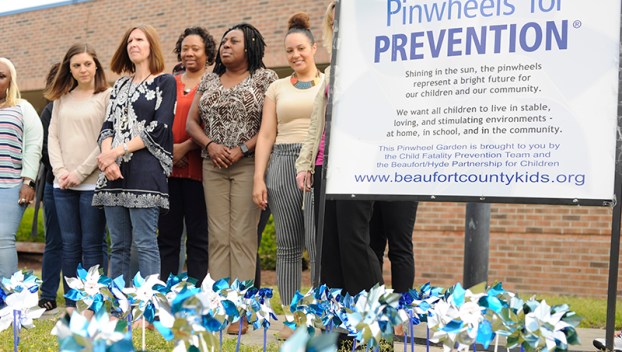 More than 119,000 cases of child abuse and neglect were investigated in North Carolina from July 2017 to June 2018. That data comes from a child welfare report from the University of North Carolina. The number actually represents a decade-long low in those cases, but according to Beaufort County Department of Social Services officials, one is too many.

Monday, DSS staff, along with that of Beaufort-Hyde Partnership for Children, gathered outside the DSS office in Washington to recognize April as Child Abuse Prevention Month. Beneath a “Pinwheels for Prevention” sign, they planted pinwheels in the ground — pinwheels a symbol of children, for their whimsy and childlike notions, and the great childhoods they deserve, according to Prevent Child Abuse America.

Social Work Program Administrator Lori Leggett spoke about how all adults have an affect on the lives of children, and the importance of raising children in supportive and stable environments — an investment in all children which benefits society as a whole. Jessica Burnham, executive director of Beaufort-Hyde Partnership for Children, then read the proclamation issued by the Beaufort County Board of Commissioners, calling upon residents to increase their participation in efforts to support families and make a good investment in early childhood.

“Child abuse and neglect is a community responsibility affecting both the current and future quality of life to a community,” the proclamation reads. 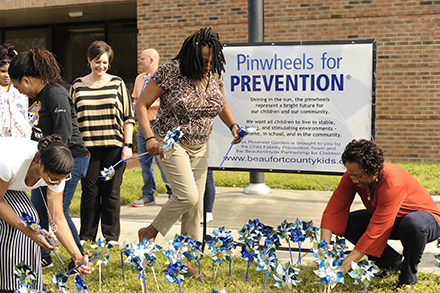 While April is acknowledged as child abuse prevention month, Burnham said that awareness should always be present.

“We really want people to acknowledge that this is definitely Child Abuse Prevention Month, but we want people to maintain this awareness throughout the year,” Burnham said. “We want to make sure if they do see signs or that something is wrong with a child, that they do report it to the appropriate officials.”

The following are signs of child abuse in children and adults, as listed on the North Carolina Department of Public Safety website:

Signs from a child

Signs from a parent